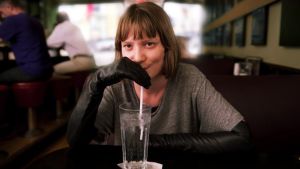 Film Title: Maps to the Stars

Dr Stafford Weiss (John Cusack) is a horrid psychotherapist who has made a fortune with his self-help manuals; his snake-oil therapies go over well with ghastly, self-absorbed actors such as Havana Segrand (Julianne Moore), a fading star who has made claims of maternal sexual abuse against her late, more famous mother. The long dead legend continues to make cameo appearances as a caustic, belittling spectre (Sarah Gadon) in her needy, unlikable daughter’s life.

For all the glass walls and phoney therapy, the Weiss family have secrets, not the least of which concern Agatha (Mia Wasikowska), their scarred pyromaniac daughter. She manufactures a friendship with Carrie Fisher (playing herself) to land a job as Havana’s personal assistant. Will Agatha use her position to come after her family? And do they deserve what’s coming to them?

Working from a scathing screenplay by Bruce Wagner, David Cronenberg’s depiction of narcissistic Hollywood pulls no punches. Even Robert Pattison’s relatively neutral chauffeur and wannabe actor turns out to be a monumental jerk.

But Maps to the Stars is something more than a biting satire in the style of The Player. The cruellest pronouncements are delivered in deadened So-Cal patterns. The most unforgivable actions are careless consequences triggered by self-regard. The hazy cinematography and an entropic tone make the viewer feel that they’re drugged up on one of Havana’s lengthy pharmaceutical shopping lists.

There are splashes – and that is the right word – of the visceral Cronenberg we’ve come to know and love. But cinematographer Peter Suschitzky’s glossy fug and all that ugly beauty makes it impossible not to think of David Lynch’s Twin Peaks on Ambien. Repugnant in the best sense.