Al Pacino displays nuance (really) as a grizzled malcontent stranded in a Texan backwater, but there are hints of something else underpinning the enigmatic screenplay 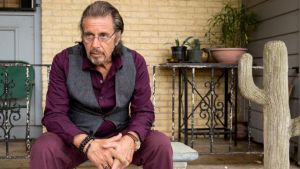 There are few careers in film-making that are as strange and unpredictable as the forking paths taken by David Gordon Green. The Arkansas-born director was heralded as a wunderkind when George Washington, his magnificent debut, was unveiled in 2000. He earned more good notices for All the Real Girls (2003), Undertow (2004) and Snow Angels (2007) before sidestepping into the goofy stoner comedy sector with Pineapple Express (2008) and Your Highness (2011) only to return to intimate, rural drama with Prince Avalanche and Joe (both 2013).

Even set against this chequered history, Manglehorn is an extremely odd picture. Manglehorn (Pacino) is a locksmith who lives in a small Texan town with a cat named Fanny. He has a difficult relationship with his grown-up son, Jacob (Messina), and with most other humans, including a sunny bank teller (Hunter), who he takes on an ill-starred date. He is surprisingly good with his granddaughter, who, together with the cat, seems like his only real link to the present. Mostly, he dwells on Clara, the One That Got Away, and the one he writes to daily, only for the letters to return, unopened.

For much of the run time, this small, imperfectly formed oddity feels like a quirky character study, one that is enhanced by a nuanced (no, really) if mannered turn by Pacino. But there are hints of something else underpinning the enigmatic screenplay. Many of the other characters that orbit around this grizzled malcontent relate stories from his past that sound almost supernatural.

At least one local – Harmony Korine’s low-aiming hustler – treats Manglehorn as if he’s a demi-god. Why? What is the deal with Manglehorn?

If this mystery were a little more amplified in Paul Logan’s screenplay, we might have something to cling to, narratively. Instead we get small-town kookiness, rather too much voiceover and a late, late punchline.

Manglehorn is also available to stream on volta.ie