James Mangold, director of 3:10 to Yuma, embraces a bit of mortal grime and delivers the most diverting superhero film in years 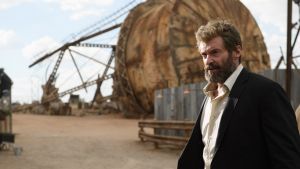 Something peculiar happened to the western during its still current afterlife. As if in mourning for its own traditions, the genre became taken up with elegiac variations. Clint Eastwood’s Unforgiven, Tommy Lee Jones’s The Homesman and the Coens’ True Grit offer key examples of the type. Older men fight to cope with the advance of unwelcome futures.

The superhero flick isn’t at that stage yet. Even those awful DC things can make more money before breakfast than a proper film can manage in a year. But time passes. Super-bloke’s temples are turning grey. We may see more films like James Mangold’s Logan.

That would not be a bad thing. Pushing much of the genre’s flash to the side and embracing a bit of mortal grime, the director of 3:10 to Yuma (not quite an elegiac western) has delivered the most diverting superhero film in many years. Hugh Jackman returns as an aging Wolverine. Grumpier. More fatalistic. Forever responsible for people he’d rather leave to their fate. Give him a hat and a pig and he’s William Munny in Unforgiven.

Now known almost exclusively as Logan, the former X-Man lives a fairly wretched live some decades into the future. There is something of Children of Men about the scenario. No new mutants have been born in 20 years and, among the last of his kind, Logan now inhabits a disused mining property not far from the Mexican border. For uneasy companionship he has Caliban (Stephen Merchant), a lanky albino who can sense other mutants, and, hidden in an adjoining building, the aging, irascible Charles Xavier (Patrick Stewart). “I’m a nonagenarian!” he snaps when somebody suggests he may be a mere octogenarian.

Everybody is in an awful state. Professor X’s brain is ailing and, when you’re telepathic, that’s a dangerous condition to be in. Caliban is confined to quarters by fear of the sun and suspicion of others. Logan is not healing as he used to. The organs that house his blades become easily infected. It’s a hard life for the aging superbeing.

Merchant, Stewart and Jackman play delightfully off one another. The first is stuffed with pathetic desperation. The second gets by on crematorium humour. The third has the air of a man yearning for a reason to be good.

It would be nice to see these three very different actors attempt a sub-Beckettian sitcom, but nobody is getting $127 million to make something that recherché. Jackman rubs up against a young girl (Dafne Keeb) who may be from a new generation of mutants and, shaken out of miserable complacency, he and Professor X put themselves on the road. In a very contemporary turn, Canada ends up offering sanctuary from oppression in the United States.

This talk of westerns is not so fanciful. As events progress, the film becomes obsessively fixated on George Stevens’s Shane. The fugitives watch the film in a hotel room. Snippets of the western’s themes work their way into the plot. Shane was merely reluctant to return to the life of the gunfighter. There is a hint here that there was never any real superhero life to begin with. Logan sneers at an X-Men comic book and makes cracks about grown men in tights.

The picture is trying very hard to be grown up here. You also sense this in 16-cert violence that, though conspicuously bloody, is no more “real” than the 12A version in Captain America: Civil War. Towards the close, villains start behaving very much as villains do in comic-book movies.

Mangold and his team do, however, inject sufficient levels of character to compensate for the concessions to conventionality. For once, a film derived from a Marvel source gives you something solid to hang on to. It’s much better than it needed to be. We look forward to the genre’s golden years with modest enthusiasm.