Jurassic World hits all the right beats, but in the end, it's just another Spielbergian safari to an island of genetically modified monsters

Donald reviews the much anticipated Jurassic World, the fourth film in the franchise. Tara reviews Joshua Oppenheimer's The Look of Silence and speaks to Brian O'Malley about his upcoming horror film Let Us Prey. 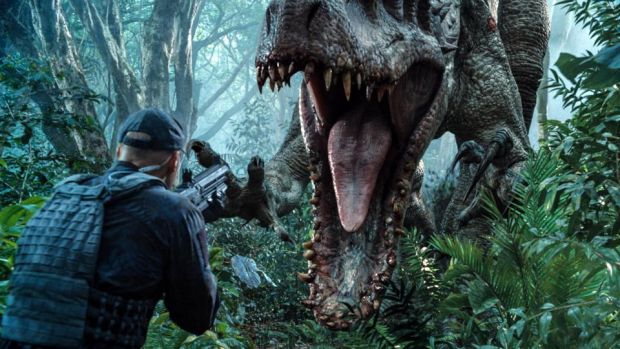 Let us be kind and make believe that the makers of Jurassic World are prepared to turn the irony beam upon themselves.

Early on in this fourth episode of the dinosaur cycle, somebody moans furiously about corporate meddling in the scientific process. Boo! Isn’t it awful how cynical conglomerates exploit the pure of heart?

Within minutes the camera has taken us to the titular theme park, where real Seattle-based coffee chains and equally genuine South Korean electronic manufacturers compete to flog their wares. If this is a joke, then it’s actually a pretty good one.

Maybe the whole film is a complex meta-gag. After all, one can think of few better examples of a cynical corporate money trap than this efficient, if militantly unsurprising, check list of Jurassic essentials.

Do we have a scene in which children find themselves trapped in a car while dinosaurs loom? We do. Ty Simpkins and Nick Robinson play a brother and sister sent to stay with busy Aunt Claire (Bryce Dallas Howard) while their mother negotiates a classically Spielbergian divorce.

Is there a gasp of wonder as we spy ancient beasts striding across yawning plains? Well, in theory. So jaded have audiences become to computer-generated images that the so-so effects here will seem no more surprising than the work of hand puppeteers. (The less said about the bafflingly perfunctory 3D, the sooner it can be erased from the brain.)

As is so often the case with current “much-anticipated” sequels, Jurassic World actually finds itself following up mostly ill-loved episodes. Spielberg’s own The Lost World was largely awful. Joe Johnston’s agreeably brief and unpretentious Jurassic Park 3 won fewer friends than it deserved.

Still, despite the lack of pressure that record implies, the film-makers still manage to underperform in the imagination department.

You won’t need to be told that – always eager to ignore the lessons of history – the Jurassic people have opened yet another attraction featuring yet more beasts from distant aeons. Jurassic World looks to be largely ignoring the previous two episodes as it attaches itself to tendrils hanging from the 1993 original. We are now on an island off Central America. The attractions are presented in state-of-the-art compounds whose apparently secure walls can resist everything but the demands of disaster-movie narrative.

So far, so expected. What’s the gimmick? What sets it apart from previous episodes? There are some boring shenanigans involving Irrfan Khan as a mysterious investor who may have done underhand deals with equally boring suited spooks. That won’t do. Oh, there’s an aquatic dinosaur, but, after performing amusingly for the crowd, it doesn’t do enough to fill up the back of a picture postcard.

Amazingly, the film’s hook seems to be nothing more engaging than a bigger, fiercer, genetically modified Tyrannosaurus rex.

Now look here. If you are going to break with pseudo-science and invent a new dinosaur, at least give the beast laser-blasting eyes or organic helicopter blades. Make it much bigger. Make it the size of the Chrysler Building. Make it breathe fire. There’s nothing to see here.

Happily, Jurassic World is kept aloft by some tolerable squabbling between Howard, who plays the work-obsessed operations manager, and the always welcome Chris Pratt, as a Velociraptor trainer called in to save the kids from becoming lunch. The dialogue isn’t great, but the two lean so hard on the punchlines that they just about kick them into action.

Coming after the typhoon of imaginative energy that is Mad Max: Fury Road, Jurassic World feels like very thin stuff indeed. But, in truth, it probably fulfils the corporate requirements. All the story beats are in the right place. There’s just enough violence. The skulduggery will do well enough.

Would you like fries with that? Have a nice day.