Inversion review: a nuanced approach to a culture rife with indignant misogyny

For the the heroine of Behnam Behzadi’s latest, the predicament is clear - no husband, no agency 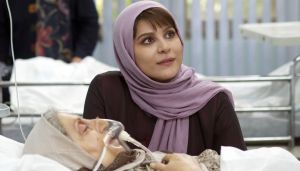 The title refers to “thermal inversion”, an unholy alliance of UV rays, aridness and ozone issues that traps pollutants over Tehran, one of the planet’s most contaminated cities. In this smoggy environment, the radiant, unmarried Niloofar (Sahar Dolatshahi) has a hot date with the man she thought she had lost her chance with years ago.

On that occasion, she stood him up to care for her ailing father. Now, by sheer, mean coincidence, when they go out to dinner, her elderly mother is hospitalised with respiratory failure, and it looks as though history is about to repeat itself.

Without anything like consultation, her siblings and extended family decree that Niloofar will leave her work, her business, her friends, and her apartment to live with mother in the unpolluted countryside. Oh, and as she won’t be around anyway, her brother Farhad (Ali Mosaffa) will rent out her shop to pay off his debts. That seems fair, right?

No ensemble of characters in any film this year will make you want to pelt them with rotting fruit quite so much as these self-absorbed bullies. The merest whimper expressed against their presumptuousness and misogyny is greeted with insults, indignation and the odd physical dig.

Writer-director Behnam Behzadi explores this conflict with understated, naturalistic scenes that move and bicker between traffic jams, shop floors and hospital corridors. Sahar Dowlatshahi, an actor who can emote with just gaze and eyebrows, beautifully complements the filmmaker’s nuanced approach.

Outside, the hot, grey haze – which is severe enough to force school closures – works as an extended metaphor: Niloofar’s life is as oppressive and stultifying as the choked skies. Her ever-ringing mobile phone doubles, thanks to Sahar Sakhaei’s clever musical compositions, as harried score.

Plucky heroines fighting everyday battles have been one of the pleasing tropes of Iranian cinema since the 1990s. Things may be better for women since Solmaz was imprisoned in The Circle (2000) for giving birth to a girl, but as with the recently widowed protagonist of The Fifth Reaction (2004), Niloofar’s situation is a simple equation for those around her: no husband, no agency.