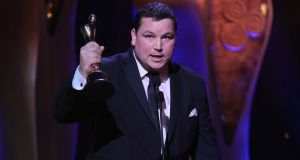 John Connors, who received the Ifta for the best lead actor in a film for 'Cardboard Gangsters' at the Irish Film and Television Awards 2018 at the Mansion House in Dublin. Photograph: Kyran O’Brien

Frank Berry’s Michael Inside, a searing drama of crime and punishment, has won best film at the 15th Irish Film and Television Awards.

The picture premiered triumphantly at last year’s Galway Film Fleadh and will go on general release shortly. It was a hotly contested year with the Iftas spread evenly throughout a range of very different projects.

Aisling Walsh won best director for the hugely moving Maudie, story of Nova Scotian painter Maud Lewis. “It’s wonderful to be a female in that company,” Walsh said of her fellow nominees.

Saoirse Ronan continued a happy 2018 by taking best actress for her performance in Greta Gerwig’s delightful Lady Bird. Currently crossing the world for awards season, Ronan, an Oscar nominee, was not able to attend.

Best actor went to John Connors for his turn as a sympathetic hoodlum in Mark O’Connor’s popular crime film Cardboard Gangsters. He cheekily thanked the Film Board before correcting himself. “Oh no, wait. The Film Board didn’t fund us,” he said. “They turned us down. They couldn’t understand our approach.”

Connors received one of the noisiest standing ovations of the night. He continued: “Despite the fact that I can’t get an agent to represent me and no film-makers or casting directors will look past the fact that I’m a Traveller, this is still a huge moment for me.”

The efficient, lively ceremony, which honoured the best in domestic film and TV drama, was hosted by comic Deirdre O’Kane at the Mansion House in central Dublin.

As expected, the aftershocks from the Weinstein scandal were felt within and without. On the red carpet, Victoria Smurfit, winner of best supporting actress for The Lears, spoke frankly about the conflagrations. “I’d say the crack on set will lessen because the men will be afraid to banter with you,” she told us. “That’s going to be the big polarising swing. Then everyone will relax and realise it’s not about a hand on the shoulder or a hand on the knee.”

O’Kane peppered her excellent monologue with references to the continuing controversies about the treatment of women in the film industry. “Good evening ladies and welcome to the 15th year of the Iftas,” she began. “If that is not enough about our women, as many as three have been nominated for best actress.”

The fact that only three actresses made it into that category has already generated some controversy. The biggest intake of breath came with O’Kane’s sly dig at John Michael McDonagh. That film-maker, brother of Martin McDonagh and director of The Guard, famously said he was “not a fan of Irish movies”.  After noting that the Irish happily claim Martin, she quipped: “His brother, John, they can keep.”

Emer Reynolds, director of the much-loved The Farthest, was at the Mansion House to accept the George Morrison Award for best documentary. That film celebrates the journey of the Voyager spacecraft. “A bit like the spacecraft, this film has travelled further than we could ever have dreamed,” she said.

President Michael D Higgins was on hand to present the Academy’s lifetime achievement award to the Dublin actor Gabriel Byrne. “He is someone who has always been a brave and outspoken advocate for justice in its many forms,” the President said.

A profoundly moved Byrne had trouble composing himself at the podium. “I’ve learned more from failure than any kind of success,” he said. “You don’t really learn anything. You just keep making mistakes and getting better.”

Fionnula Flanagan presented the “rising star” award to the talented young actor Jacob McCarthy for, among other things, his role as a young man with Asperger Syndrome in The Drummer and the Keeper. “Mum and dad, this is a token of your love,” he said with the hint of choked-back tears.

Ros Hubbard, the great Irish casting director, received the Spotlight Casting Director Award at the ceremony. Hubbard has long been at the very top of her profession. Together with her husband John, she has worked on such films as the Lord of the Rings trilogy, The Hobbit, Angela’s Ashes, The Mummy and the Bourne trilogy.

“I owe a huge amount to my background here,” Hubbard said. She acknowledged the efforts that President Higgins had, in previous roles, made to remodelling the Irish film industry.

“Other countries have copied the model, but we were the first, and Michael D Higgins was the one who did it.”