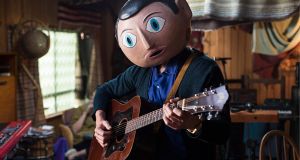 Lenny Abrahamson’s Frank, starring Michael Fassbender as an eccentric musician who wears a huge false head at all times. The movie has picked up nine Ifta nominations

Lenny Abrahamson’s Frank stars Michael Fassbender as an eccentric musician who wears a huge false head at all times. Terry McMahon’s Patrick’s Day features a breakout performance by Moe Dunford as a mentally ill man in conflict with his domineering mother.

Both films picked up nine nominations when the shortlist was announced.

“This year’s Nominations showcase to the world what Ireland’s small but excellent film and television community has to offer,” Aine Moriarty, CEO of the Academy, said. “Their hard work over the last 12 months has delivered world-class standards with some of the most diverse and engaging Irish films and dramas along with great feature documentaries and shorts.”

Gerard Barrett’s Glassland and Frank Berry’s I Used to Live Here – two hugely praised realist films set in Tallaght – were also short-listed for best film alongside Stephen Bradley’s Noble, a biopic on Christina Noble, and Tomm Moore’s Oscar-nominated animation Song of the Sea. There will be much rejoicing in Ms Noble’s camp as In A House That Ceased to Be, Ciarín Scott’s searing documentary concerning the campaigner, is also nominated for best documentary.

One becomes two
In March, Ifta confirmed that this year’s ceremony would progress in a bifurcated state.

The Ifta Film and Drama Awards are to be held on May 24th the Mansion House in Dublin; the Ifta Television Awards will be held in October. TV3 will subsequently broadcast a one-hour Awards Special with all the highlights and interviews with nominees and winners.

The slightly idiosyncratic split in nominations means that today’s announcement also covers television drama. Unsurprisingly, the hugely popular Love/Hate tops the charts with seven nods. It shares that spot with the hairy period drama Vikings. Among the other domestically shot series figuring strongly were Charlie, The Fall and Game of Thrones.

The acting nominations take in a nicely balanced array of supernovae and newcomers. The two biggest male Irish stars of the moment are on the best actor list: Colin Farrell for Liv Ullmann’s Miss Julie and Michael Fassbender for Frank.

Rather inconveniently, the Ifta ceremony takes place on the same night as the awards bash at the Cannes Film Festival. Both Farrell and Fassbender also feature in films vying for the Palme d’Or: the former for Yorgos Lanthimos’s The Lobster; the latter for Justin Kurzel’s Macbeth.

The best actress shortlist comprises Tara Breathnach for A Nightingale Falling, Simone Kirby for Jimmy’s Hall, Deirdre O’Kane for Noble and – most encouragingly -- Jordanne Jones for I Used to Live Here.

Ms Jones, a teenager, had never acted on screen before her stunning turn in Mr Berry’s film. She has since secured an agent and set her sights on a career in the business. The nomination gives her a deserved boost.

Make-Up & Hair Sponsored By M.A.C
All is by My Side
Frank
Ripper Street
Vikings

International Film
‘71
Boyhood
The Imitation Game
The Theory of Everything

Great reads: 20 books to unwind with this summer
7