If I Stay - trailer 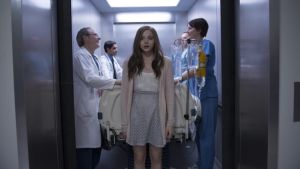 Film Title: if I Stay

There is much about this Young-Adult weepie that seems designed to kick up fury and disgust in any right-thinking adult.

In a scenario purpose-built for a situation comedy, Chloë Grace Moretz plays Mia, a young woman who is culturally at odds with her parents. Prepare to swoon with shock. The twist is that, whereas they are committed “punk rockers”, she is a talented classical cellist with ambitions to go to Juilliard.

All this would be cheesy enough if played convincingly. But, as is often the way in cosy American films, Mum and Dad have managed to institutionalise all the juice and danger out of the music they supposedly love. When Mia is preparing to go to a Halloween party, mum suggests that she dress up as Debbie Harry, Patti Smith or Kim Gordon. Those highly individual, complex women are, you see, now as easy to package as Superman or the Wicked Witch of the West.

The rock parents are, of course, delighted when their daughter hooks up with the lead singer (Manxman Jamie Blackley) in one of Portland’s many up-and-coming bands. (Yeah, it’s set there, I’m afraid.) They don’t seem to mind much that the group sounds like a decaffeinated version of The Dandy Warhols. Why would they? They dress like Janis Joplin’s secret love children, after all.

So, the ambience is ghastly. But, structured round a gaping first-act tragedy, RJCutler’s take on Gayle Forman’s novel is actually rather moving and quite nicely played. It’s no The Fault in Our Stars, but it’s not a complete dud either. That will have to do.