Can someone please put these animals out of their misery? 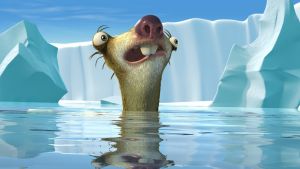 Sit down, Ice Age sequence: we need to have a serious talk. When we started out, it was all love and feels. You were this cute cartoon version of Three Men and a Baby. There was genuine chemistry between Ray Romano, John Leguizamo and Denis Leary.

And then, one by one, the classic trio – Manny the grumpy mammoth, Sid the irritating sloth and Diego the sabre tooth tiger – all got married off, and/or acquired more chums and sidekicks.

And that was fine. Who are we to begrudge digital prehistoric animals their happiness? And then Manny had opossum in-laws and a daughter. And then she grew up and acquired a fiancée.

It’s like Fibonacci’s rabbits around here. And that’s before we draw a veil over those Neil deGrasse Tyson pop-ups.

So, here we are: five films in, and by the time we’ve finished with the introductions, there’s hardly any time for a movie or jokes. Laugh? Not even once; not even close.

And what new pettifoggery is this? You’ve just lazily recycled Cosmic Scrat-astrophe, last seen as a supporting short in front of the Peanuts feature, as a sub-plot? We say sub-plot: we mean adjunct: sub-plot implies a half-arsed attempt at cohesion. But this isn’t half-arsed. This doesn’t even look quarter-arsed.

When Scrat accidentally sends a meteor hurtling towards Earth, we don’t think: “Oh no! Those trillions of Ice Age characters are all going to die!” We instead silently pray “Godspeed, oh mighty space rock.” The meteor, alas, is the least of your problems, Ice Age. You have created your own ugly, opportunistic, extinction-worthy mess. Begone.