Kim Mordaunt, the boundlessly enthusiastic director of The Rocket, on hard-line dictators, unexploded bombs - and how he came to be the host of a rigged gameshow in communist Vietnam 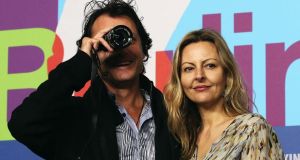 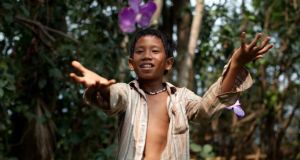 Every now and then, a film offers us a cultural phenomenon so absurd that the viewer is forced to conclude this must be a genuine event. After all, nobody would be crazy enough to invent something that unlikely.

Such is the case with the finale of Kim Mordaunt’s excellent The Rocket . The Australian’s first dramatic feature, set in remote corners of Laos, ends with a bizarre festival that invites citizens to construct the biggest, most dangerously explosive rocket. Still littered with unexploded bombs from the Vietnam War, the Laotian countryside offers the brave entrants plenty of useful ordnance. Mordaunt happened upon the event when making his documentary Bomb Harvest , a study of the kids who fish around the still-dangerous munitions.

“Oh, it’s such an interesting festival. It’s incredible,” he says. “We took the explosives expert on Bomb Harvest to a rocket festival. We heard that some of the kids were trying to extract explosives from the bombs for it. Our expert said: ‘This is too scary for me. I’d much prefer to dismantle a 200-pound bomb.’ It’s about this catharsis of war. It’s the most bombed place on the planet. So, you can’t help feel all this has symbolic meaning.”

But there’s more to it than that. Right?

“It’s them asking for rain,” he says. “It’s them shooting back and shouting: ‘Come on, rain on us you bastards!’ We loved the irreverence. It’s so alive – someone asking for rain in a subsistence country.”

Mordaunt is among the most enthusiastic men you could ever hope to meet. Every question triggers a vigorous paragraph of anecdote and opinion. He is, you suspect, the sort of chap who will not allow life to deny him any ambition. It’s been an eventful journey so far. Having studied film production in Sydney and acting in London, he and his wife Sylvia Wilczynski – also his producer – threw themselves towards southeast Asia in search of adventure and inspiration.

“We are still a long way from anywhere in Australia,” he says. “My wife and I have a very close partnership. We lived in Hanoi for a while and we connected with that on a real level. Sylvia worked on a propaganda newspaper. I landed a job on a rigged gameshow. I was just teaching drama and found myself presenting this thing. The whole thing was rigged and only party members could win. We were saying ‘yes’ to everything.”

Hang on! He worked on a rigged game show in the northern regions of Vietnam. There’s got to be a film in that.

“Oh yeah. There is. It was a strange time. We loved Hanoi. There were still hard-line dictators about, but it was when the market economy was slipping back in. We used to escape to Laos a lot. That was like going back in time.”

The Rocket could be seen as a political film. As Mordaunt notes, whereas much has been written about the American interventions in Cambodia, very little has been said about the devastation in neighbouring Laos. The film addresses the lingering trauma and also addresses the presence of robber barons – many Australian – in that part of the world.

“There are a lot of cowboys about,” he says. “Our government is always saying we must relate to Asia. But the majority of that relationship is sheer economic opportunism. There are Australians making millions every year out of the place.”

That anger acknowledged, The Rocket is, first and foremost, a touching drama of childhood in adversity. Sitthiphon Disamoe plays Ahlo, a young boy who, in honour of a myth concerning the dubiousness of twins, is treated as a harbinger of ill fortune. The tradition has it that, when twins are brought into the world, one will be lucky and the other will cursed. Ahlo’s sibling dies in childbirth, further accidents befall older relatives and it is decided that he must be the one carrying the curse. A journey towards redemption begins.

“We went to a dozen villages and that myth is completely real,” he says. “We didn’t get that from Googling. Traditional people still believe that strongly, but they don’t practise it as much.

“Having said that, you can go to a village in northern Thailand or Laos and find a village, then a bridge and a few little houses on the edge. Often that’s where the twins live. They aren’t allowed to live in the village, because one is bad luck and they don’t know which one.”

The film was shot partly in Thailand and partly in Laos itself. That nation is one of the few old-school Communist countries to survive the convulsions of the 1990s. One can imagine that it must have been difficult negotiating with the authorities and hiring personnel. Not many of us can name another Laotian film.

“We did have a lot of difficulty getting around censorship,” Mordaunt muses. “We didn’t have much money. If you travel, then you have to build those days into the schedule. Those were the real big difficulties on a small budget. And then we had to try and make it look seamless when it ends up on screen.”

At any rate, the gamble seems to have paid off. The Rocket has played to great acclaim throughout the world. The film won best screenplay at the Australian Academy Awards and, just three weeks ago, it took best debut feature from the Dublin Film Critics Circle at the Jameson Dublin International Film Festival.

Well, he certainly seems to have the Celtic gene for continuous chat. We can, I think, safely assume that he and Sylvia will talk their way towards another feature without much delay.

“Ah it is lovely,” he says. “It’s got a bit easier. I am sent a lot of scripts. It’s just deciding what to accept. There’s heat on The Rocket now. But that will fade.”

Slacking is not an option.