Horror classics to screen at this year’s Cork Film Festival 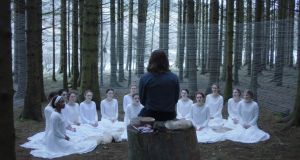 Malgorzata Szumowska’s The Other Lamb, the story of an all-female cult, closes the Cork Film Festival this year.

Halloween may well be gone for another year but horror fans are still in for a treat on Leeside this month when the 64th Cork Film Festival shows one of the most notable films of the genre complete with a live score.

According to Cork Film Festival director Fiona Clark, Der Golem from 1920 by Paul Wegener and Carl Boese is regarded as a classic example of early German expressionism and the festival is delighted to be showing the silent masterpiece in a glorious new 4,000 pixel restoration.

“Der Golem is a landmark film of the horror genre which tells the tale of Rabbi Loew, a Jewish community leader who creates a huge monster from clay to help save his people from persecution and we’re showing it with a live score by international silent film accompanist, Stephen Horne. ”

“Cork Film Festival has always sought to offer audiences the latest and best in world cinema – from award-winners on the international festival circuit to exciting new discoveries and home-grown talent and this year we are showing over 300 films,” said Ms Clark.

“The breadth and quality of the programme, with 63 countries represented, reflects our ambition to celebrate the best cinema to a diverse and growing audience. With our 64-year legacy, we will continue to challenge and excite,” she added.

Among the many features to receive an Irish premiere at this year’s festival is Feras Fayyad’s gripping documentary on war-torn Syria, The Cave which has just won the People’s Choice Documentary Award at the Toronto International Film Festival.

“Feras Fayyad receive an Oscar nomination for his documentary Last Men in Aleppo which we screened in 2017 and we’re delighted to be able to now show The Cave which is a harrowing account of one woman’s efforts to provide medical care in war-ravaged Syria,” said Ms Clark.

Among the other films to receive a gala screening is Aoife Crehan’s comedy-drama debut The Last Right which chronicles the adventures of Daniel Murphy, played by Michael Huisman, who, flying from New York to Ireland, ends up in charge of a corpse belonging to someone he never knew.

“As Ireland’s first and largest film festival, we proudly showcase the best in Irish cinema, and serve as a platform for local filmmakers, supporting them in developing their craft. A central pillar of our mission is engaging young people in film, spearheaded by our magical family gala Frozen 2.”

The Irish Time’s film critic, Donald Clarke will introduce a fascinating documentary on arguably the most influential film critic of all time, The New Yorker’s combative and feisty, Pauline Kael in Rob Garver’s What She Said: The Art of Pauline Kael.

Among the other stand-out documentaries are Academy Award-winning director Alex Gibney’s acclaimed Citizen K about Mikhail Khodorkovsky, once believed to be the richest man in Russia and Patricio Guzman’s exploration of the legacy of Pinochet’s era in Chile, The Cordillera of Dreams.

“Lost Lives which is directed by Dermot Lavery and Michael Hewitt and is based on David McKittrick’s book of the same name, will also grip audiences, documenting the lives of those who died during the Troubles in Northern Ireland, ” said Ms Clark.

Among the other events is an illustrated talk by Dr Ciara Chambers of UCC on the IFI Irish Independence Newsreels Collection ‘Cork in the Newsreels’ which looks at how Leeside appeared frequently in newsreels during the War of Independence and the Irish Civil War.