Review: Isabelle Huppert has fun with every scene in this urban thriller-cum-fairy tale 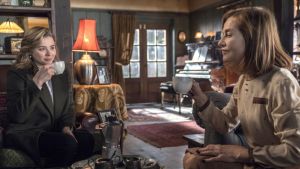 Frances (Chloë Grace Moretz) is an earnest young woman, employed by a snooty New York restaurant, who finds a handbag in a subway car and immediately sets about returning it to its owner. You don’t return the bag, scoffs her worldly-wise room-mate, Erica (Maika Monroe); you call the bomb squad.

The bag belongs to an older woman named Greta (Isabelle Huppert), who invites Frances in for tea at her cosy little home. The lonely women bond; Frances has recently lost her own mother and is miffed at her father for “moving on”; Greta misses a daughter who lives abroad. And then it all goes horribly wrong. Too many calls and texts and one upended table later and Frances has a diabolical lady stalker on her tail.

The camp carrying on and a mostly female cast provide a hypermetacommentary on 1990s stalker films, particularly the girlishly energised Single White Female, Poison Ivy and The Hand That Rocks the Cradle. But there’s more to Neil Jordan’s new film than winking.

Greta may be a contemporary urban thriller, but it’s also a compellingly weird fairy tale, and it’s impossible not to see it as adjacent to Jordan’s The Company of Wolves or, perhaps, just down the lane from The Butcher Boy.

It falls to Monroe to provide acerbic commentary on the increasingly unmoored fable playing out between Moretz and Huppert. Moretz makes for a likable, wide-eyed damsel, but Greta is all about Huppert, who has fun with every scene. If you have ever yearned to see Huppert performing a demented ballet in her stocking feet, playing monstrous mommy with a cookie cutter, or throttling Liszt’s Liebesträume out on a piano over and over and over, then Greta is the berserk movie for you.

Huppert’s is not the only maker of mirth. This is Jordan’s lightest, darkest film in years; Seamus McGarvey’s camera glides and sneaks; Javier Navarrete’s score thrums menacingly, and the script - co-written by Ray Wright and the director - is carefully calibrated.

Welcome to Sligoville: The story of the Irish in Jamaica
10