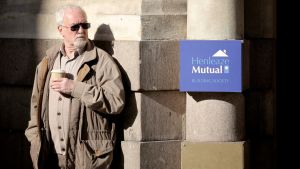 “They may take our pensions but they can never take our lives” is the battle cry that underscores this rather gentle comedy.

They didn’t mean for things to turn out this way, but when respectable middle-class retirees Arthur and Martha Goode (Bernard Hill and Virginia McKenna) discover that their pension has evaporated, they stumble into a life of crime.

They’re not alone: many of their peers have fallen victim to dodgy financial dealings. Thus, Arthur and Martha undertake a series of bank robberies, so that they might take back what rightfully belongs to their friends. After all, well, you’ve read the title, right?

John Miller’s good-natured picture makes a noble stab at yoking real-world social problems to capering. Golden Years lacks the production values and A-list clout of such ‘grey pound’ genre competitors as The Best Exotic Marigold Hotel, but it is peopled by some lovely performers including Born Free’s Virginia McKenna, who came out of retirement to bring pathos to such old-school sitcom one-liners as: “I haven’t had a bit of tickle let alone any slap for longer than I care to think about.”

The plot does get increasingly ramshackle as it works its way toward One Last Score (are we quite sure there’s a super bank where all the nogoodnik bank managers keep their stashes?), but if you’ve been missing Only Fools and Horses Christmas specials, then you’ll likely have fun with this.

Shirley Jackson: ‘It’s thrilling to see a woman who doesn’t care about the niceties of society’
7

Don Delillo: ‘Conspiracies have always been on my mind’
Real news has value SUBSCRIBE