In a night of upsets, Rami Malek won best drama actor for his role as late Queen frontman Freddie Mercury in "Bohemian Rhapsody," and Glenn Close won for "The Wife" over presumed favourite Lady Gaga in "A Star is Born." 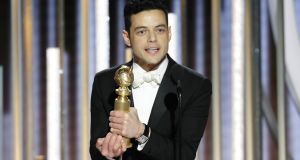 Best drama actor, Remi Malek: ‘Thank you to Freddie Mercury, for giving me the joy of a lifetime.’ Photograph: Paul Drinkwater/AP

There was a genuine shock at the Golden Globes on Sunday night when Bohemian Rhapsody, biopic of Queen front-man Freddie Mercury, beat runaway favourite A Star Is Born to best drama film. Rami Malek took best drama actor for his turn as Mercury. “Thank you to Freddie Mercury, for giving me the joy of a lifetime. I love you, you beautiful man. This is for and because of you, gorgeous,” Malek said. The film became mired in controversy when its director Bryan Singer, unmentioned at the ceremony, was fired in mid-production for unexplained absences and tensions with crew. Bohemian Rhapsody received mixed reviews, but proved a massive hit at the world box office.

Peter Farrelly’s Green Book, which stars Mahershala Ali and Viggo Mortensen as respectively an African-American musician and the wise guy who drives him about the US south in the 1960s, won best comedy or musical film. Ali won best supporting actor. Also taking best screenplay, Green Book topped the rankings with three wins.

Bradley Cooper’s A Star Is Born, a third remake of the show business melodrama, ended up with just one award: that for best original song. It had been expected to sweep the board. Lady Gaga, lead in Cooper’s debut as director, lost best drama actress to the veteran Glenn Close for her turn in The Wife. Close was visibly astonished. “We have to find personal fulfilment. Follow our dreams. We have to say: I can do that and I should be allowed to do that,” she said.

Olivia Colman won best actress in a comedy or musical for her role as Queen Anne in the dark period comedy The Favourite. Produced in Dublin by Element Pictures, the film had been nominated for five globes, but failed to triumph in any of its other categories. Colman, among the most admired British actors of her generation, gave the most charmingly unpretentious speech of the evening. “Thank you so much,” she said. “I’m not going to cry because my whole table will point and laugh at me. Thank you for the sandwiches!” Ed Guiney, the film’s Irish producer, was among those celebrating her win.

In a weird procedural anomaly, the Globes prohibit films in languages other than English from competing in the races for best film. As a result, Alfonso Cuaron’s Roma, the best-reviewed film of the year, was never a contender for drama film. That picture, a Netflix production concerning a middle-class family in 1970s Mexico City, took best foreign language picture and Cuaron won best director. He now looks like an odds-on favourite for that gong at the upcoming Academy Awards. The hitherto relentless momentum behind A Star is Born has slowed considerably.

Actors Sandra Oh and Andy Samberg presented with the relaxed élan that is very much the Golden Globes’ defining style. In the opening monologue, after taking gentle digs at some of the nominated films, Oh, a Korean-Canadian, alluded indirectly to the notorious casting of Emma Stone as an Asian character in Cameron Crowe’s 2015 film Aloha. “I’m so sorry!” the spirited Stone yelled from the audience.

Voted upon by fewer than 100, mostly obscure members of the Hollywood Foreign Press Association, the Globes do not have the prestige of the Oscars, but the ceremony has an informal zip that is missing from the senior event. The clinking of glasses and low mutter of conversation confirmed that the famous people were enjoying themselves.

As ever there was much chatter about the gowns as the supernovae arrived on the red carpet. Lady Gaga buffeted all competitors aside – figuratively and literally – with an enormous construction from Valentino whose lavender shades were echoed in her hair. Attention was also directed towards Timothée Chalamet, nominated for Beautiful Boy, who turned up in a black affair that made him look like a displaced ice dancer.

The drive for diversity continued to be a subject for discussion on the podium. Regina King, who won best supporting actress for Barry Jenkins’s If Beale Street Could Talk, declared that she would strive to ensure that, with every project she produces, 50 per cent of the crew will be female. Both Emma Stone and Rachel Weisz were nominated in that category for The Favourite, but King, strong as a defiant parent in 1960s New York, always seemed the more likely winner.

Saoirse Ronan, sleek in a silvery affair set off by green earrings, presented the best actor in a comedy award to Christian Bale for his bossy performance as Dick Cheney, former US vice-president, in Adam McKay’s satirical biopic Vice. “I will be cornering the market on playing charisma-free a**holes,” he said. “What do you think, Mitch McConnell next? Thank you, Satan, for giving me the inspiration to play this role!”

The Globes have long honoured life achievement in film with an award named for Cecil B DeMille and in 2019 that gong went to the veteran actor Jeff Bridges. This year also saw the inauguration of The Carol Burnett Award for a distinguished career in television. Just as DeMille was the first to receive the statuette bearing his name, Ms Burnett, a legend in American comedy, was there to enjoy deserved applause. “Does this mean I get to accept it every year?” she joked. “We’ve been granted a gift, a canvas to paint with our talent, one that can make people laugh, or cry, or maybe both.”

Caitriona Balfe, from Monaghan, nominated on a fourth occasion for her role in the TV series Outlander, once again went home disappointed. The television awards were spread evenly across an array of diverse projects. Ms Oh was audibly moved to win best actress in a TV series for Killing Eve. The British actor Ben Whishaw won best actor in a limited series for his role as Norman Scott, the young man who had an affair with UK Liberal Party leader Jeremy Thorpe, in the impressive BBC show A Very English Scandal. “He’s a true queer hero and icon - Norman, this is for you,” Whishaw said from the stage. Who would have thought such a thing would happen when Thorpe’s trial was rocking Britain in 1979.