‘Resistance’: Baddasses of the Irish War of Independence

Review: The sequel to RTÉ’s ambitious ‘Rebellion’ take liberties – but it’s a drama, not a history lesson 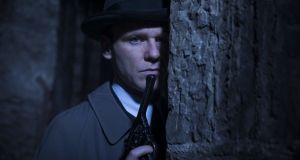 History may be written by the victors, but from Tolstoy to O’Casey more interesting stories tend to belong to its bystanders.

In Rebellion, RTÉ’s historical miniseries detailing the Rising, writer Colin Teevan took both approaches, depicting events through the eyes of characters real and fictitious, an intermingling, it felt, between the heroes and the half-remembered.

For Resistance (RTÉ One, Sunday, 9.30pm) he revives Jimmy Mahon (Brian Gleeson, whose Rising survivor is still glum with duty) to be a hitman for Michael Collins during the scrappy War of Independence. It is not, we see early, a part he plays with much ease.

“Detective inspector,” Mahon says, squinting in the hazy light of an early morning ambush, “time to say your prayers.” Even his accomplice finds this line cheesy – “Since when did you start caring about prayers?” he asks just before the scene gets messy – and you can understand his misgivings. Is the War of Independence any time to start behaving like a badass?

Historical drama shouldn’t be immune to contemporary verve, though. Rebellion tended to enflame the passions of Ireland’s continuity police, who pounced on every inaccuracy, but it was never sold as a history lesson.

Here, when a secret Dáil meeting is disturbed by the Royal Irish Constabulary, it might not be historically accurate that the rooms of Constance Butler’s home would be briskly reordered with the panache of a prohibition speakeasy – Parliament? No, nobody here but us music lovers – or that the cops would find themselves fuming on a Georgian rooftop while Gavin Drea’s Michael Collins was whisked to safety, but you can’t really quibble with the gist.

When we find General Winter, portrayed by Paul Ritter as a figure of almost cartoonish villainy, holed up in his yard shooting delf instead of game fowl, the show might as well wink at the audience. Would you like to stay hemmed in by cautious concern, or would you prefer the thrill of a hunt?

Besides, the programme’s hokiest conceit, where Gleeson and David Wilmot play divided brothers on opposite sides of the war, was not that rare a phenomenon; something recently explored by philosopher Richard Kearney in Twinsome Minds. That Jimmy, injured and recognised by the RIC, is immediately reassigned as an intelligence officer, might be a little harder to accept, but here too the show dares you not to enjoy the transition. Mahon is given a new suit to make him suave enough to play the part. “They’ll be looking for a thug, not a swank,” reasons Collins.

The new series attires itself similarly, in painstaking, pretty detail, if a little stiffly, clinging to every dateless Dublin location. The episode hinges on something more enduring, though, giving Simone Kirby’s Dublin Castle code-breaker, Ursula Sweeney, reason to turn informant. Here, she is cast as a unmarried mother, ashamed and secretive, whose child is being giving up for adoption against her will to rich American parents. “They said he was their ward,” she says of the nuns, “and I was a fallen woman.”

Such views are not historically inaccurate either, and countless stories like hers would remain a blight on the nation that would emerge for generations to come. Sweeney’s decision to exchange secret information for some resistance muscle may transform a very complicated history into a far too neat plot device, but who resents the effort? If you knew your place in history already, wouldn’t you take the opportunity to rewrite it?

20 years on: the complicated legacy of Sex and the City
9

Gwyneth Paltrow: ‘I can’t eat this shit. Let’s go up to my suite and order room service?’
10