Ginger Baker: Born to be wild

When it came to making a film about hellraising drumming legend Ginger Baker, 6ft 5in ex-boxer Jay Bulger was definitely the right man for the job 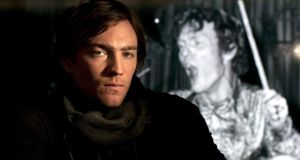 There are frontline journalists who risk life and limb on stories that go beyond the official, embedded narrative. There are reporters working, at great personal risk, under tyrannical regimes and appalling despots. Jay Bulger, the Irish-American documentarian behind Beware of Mr Baker , can’t have imagined that filming the former Cream drummer Ginger Baker would land him in this particular subset.

But that, as Bulger’s fabulous new film soon reveals, is precisely how things turned out.

“I have a really good sense of humour and I don’t take anything too seriously,” explains the young film-maker. “It’s in one ear and out the other with me. Once Ginger Baker realised he couldn’t hurt my feelings, he became a lot more warm and friendly. Then he went on to break my nose. I was leaving and it was his last chance to do it. It’s okay. I can’t tell you how much I deserved it.”

This fracas is typical of the fraught drama that characterises his portrait of the legendaryily cantankerous drummer. Throughout the film, Baker’s bitter, hilarious, angry recollections of an extraordinary career are framed and prodded along by Bulger. As often as not, the filmmaker is told to shut up, to f**k off or to ‘ask a real question’.

“It takes a very specific type of personality to do this type of job,” laughs Bulger.

“I’m six foot five. I grew up boxing. I was a champion, so I know how to take a punch. My grandparents are all from Kinsale and they all have the darkest sense of humour. I think most people run away from these things. There is a sign in front of Ginger’s house: Beware of Mr Baker. It doesn’t say trespassers will be shot. It says beware of Mr Baker. From afar it’s very terrifying. Up close, it maybe shows a very dark sense of humour. He is Irish too, remember. So he has that same darkness in him. We got along just fine.”

Well, they did and they didn’t. You do certainly detect chemistry between the two men. But it’s one of the very volatile, potentially explosive kind. Bulger comes across as a hugely relaxed sort of individual. Raised in Washington DC, he rarely raises his voice and finds the humour in every situation. Mr Baker works hard to locate offence where none is intended. Mind you, one does occasionally get the idea that the interviewer is ever-so-slightly goading his subject. There is a sense of a blue-touch paper being cautiously lit before the mischief maker retires.

“There are a lot of factors that led into me being the right person to do it,” he laughs. “Ginger might have initially said I was the worst person to do this. Now he’s seen the product he would maybe not say that. But I am very irreverent. I had so much fun hanging out in the lion’s den, he made me much better at what I do. He kept me on the toes.”

Bulger may have been the right person for the job but he was hardly the most obvious candidate. A former amateur boxing champion who wound up being a Vogue magazine cover star and Calvin Klein model, he is a graduate of Fordham University and a skin-cancer survivor. He had no experience as a film maker, when he contacted Ginger Baker, posing as a Rolling Stone reporter. The budding director spent the next four years interviewing and compiling footage for what would become Beware of Mr Baker .

“I just started calling him on the phone and appealed to him by talking about his African work and so on,” recalls Bulger. “From there he was really interested. People would phone him up and ask him why he didn’t get on with Jack Bruce and what it’s like to work with Eric Clapton. That sort of thing. So when I started talking about the African music I heard his ears prick up. Eventually, after a half dozen phone calls, he said you have to come here. You just come. Just fucking come already. At that point, I was thinking I wasn’t sure I wanted this to happen. Faced with doing it was daunting. But it fell into place. I went there and was with him for three months and got him to tell his story. Eventually, he was like “When is this fucking story coming out in Rolling Stone ?” I had forgotten about the Rolling Stone part. It was a pain in the ass and took maybe nine months to get it published. And when it got published, I put together a package and raised some money. It was a four-year process in total.”

One wonders to what extent Baker is faking the anger. He clearly enjoys his reputation as the wild man of rock. Both Eric Clapton and Jack Bruce, who completed the hard-rocking trio Cream, confirm that he has always been a difficult old sod. The perennially awkward John Lydon – for whose PiL Baker played in the 1980s – still seems in awe of his old mucker’s drive and ire.

“Nothing gets in his way when he wants to pursue his passion,” says Bulger. “He got the first Range Rover in the world and drove it through the Sahara. He is monomaniacal. His ride has been like no other. He’s a testament to the will and the true grit of the World War Two generation that could not be defeated by the Nazis. It’s so different from the pussified generation now. All I know is you look at him and you say: oh, this is how we defeated the Germans.”

Over the course of the film, Baker, an arranger, a drummer, an old-school band leader, an erstwhile pioneer of world music, emerges as a charismatic contrarian. He’s anti-establishment yet he’s also a passionate polo player; he’s careless with his (many) women and children but he adores ponies.

“He’s a walking contradiction,” agrees Bulger. “It’s like rhythm: you put 12 over eight, five and four. He’s a highly polyrhythmic being. And its like catch-up for the rest of us.”