Review: Adaptation of the play ‘Dead of Night’ transfers the show-stopping moments well 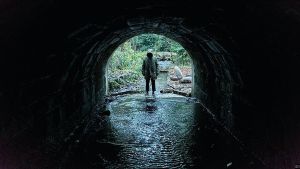 Prof Philip Goodman (Andy Nyman), is a celebrity debunker of the paranormal who is generally quit to spot hidden mic feeds and psychological manifestations of familial discord. Goodman himself had a troubled childhood, growing up with a strict Jewish father and a dark secret. His hero worship of another 1970s TV sceptic got him through.

The older paranormal buster hasn’t been seen since his cases involved a battle-axe mother (shown in archive footage) adopting a spooky voice to tell tales on her adult daughter: “She fingered herself last night, thinking about John Travolta. ”

When he mysteriously reappears to ask Goodman to investigate three unsolved cases, the latter obliges.

In the first, a prickly nightwatchman (an intimidating Paul Whitehouse) with a tragic family history sees and hears terrible things while guarding a derelict building once used as an asylum for female patients. In the second, a nervy, bullied young man (The Imitation Game’s Alex Lawther, excellent) is involved in a hit-and-run incident with a demonic beast, while driving deep in a forest. The third segment concerns a wealthy high-flier from the financial sector (Martin Freeman, oozing smug), whose house is terrorised by a poltergeist just as his wife is going into labour.

In time-honoured portmanteau tradition, an encore suggests that all these stories have merely provided clues to a greater horror.

Andy Nyman (the co-creator of Darren Brown’s stage-shows) and The League of Gentlemen’s Jeremy Dyson scored a West End hit with Ghost Stories in 2010. The play Dead of Night, a creep-out in the style of the Ealing genre standard, was always likely to be transferred to the big screen.

Often, however, one can’t help but see where the stagecraft ought to be. There are floating sheets and bangs and bumps that neither yield dread nor jump scares. The small spaces, too, seldom fill up the larger, more expansive format.

Against that, certain show-stopping moments do transplant successfully. The performances are ace. And the film makes terrific use of what can only be called Dismal Britain: ugly, windswept roads, empty pubs by daylight, and gloomy caravans. Class snobbery, anti-Semitism and vile depictions of childhood bullying ensure this is never the green and pleasant land the Brexiteers had in mind. Or so we hope.