Geoffrey Rush: ‘I used to be the Fool; now I’m Lear’

20 years after ‘Shine’, the self-effacing Aussie is the youngest actor to have won the elite acting treble of an Oscar, Emmy and Tony 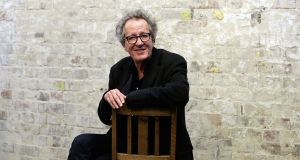 Should you ever require an Oscar winner to compile cheat notes for a play, might we point you towards Geoffrey Rush, an actor who can make you rethink everyone from the Bard to the breast-beating Greeks, and who can still sound enthusiastic about his earliest stage turns in Waiting for Godot (opposite his then flatmate, Mel Gibson) and Juno and the Paycock.

The Australian actor is, accordingly, full of questions about Ireland’s centenary celebrations: “The thing that astonishes me about the O’Casey plays is the timeframe between the events and the writing,” he gushes. “It’s almost like reportage.”

The youngest of an elite group to have managed the great acting treble – having lifted the Oscar, the Emmy and the Tony – Rush is now such a familiar screen presence, one can easily forget that he was a “latecomer” to the movieverse.

A theatre veteran who trained at Queensland Theatre Company in Brisbane and L’École Internationale de Théâtre Jacques Lecoq in Paris, Rush had tread many’s a board before his big screen debut. He was 44 and the movie was Shine, the 1996 biopic of the pianist David Helfgott, and the first performance to win the Academy Award, Bafta, Golden Globe, Critics’ Choice Movie Award and Screen Actors Guild Award.

“When I started out the subsidised theatre scene was taking off,” he recalls. “The film industry was still very small. It simply didn’t occur to me that I had a future there. But after years of doing eight plays a year, it was time for a change.”

Rush has certainly made up for lost time with three additional Oscar nods for roles in Shakespeare in Love, Quills and The King’s Speech. Not to mention such box office stormers as Finding Nemo, Minions and the Pirates of the Caribbean series. He’s worked with Spielberg on Munich and the Coen Brothers on Intolerable Cruelty.

“I often get the squint,” he laughs. “‘It’s that guy. What’s he in again?’ Or, when I do get asked for an autograph – or more often a selfie nowadays – it’ll be dad telling their kids: ‘Look, it’s Capt Barbossa from the Pirate movies’. And the kids have no idea what he’s talking about.”

Rush has also essayed the Marquis de Sade (Quills) and Peter Sellers (The Life and Death of Peter Sellers), a role he regards, perhaps surprisingly, as his darkest: “I almost scared myself. There’s something about all of Sellers’s contradictions that remains very unsettling.”

Next year, he’ll be squabbling once again with Johnny Depp’s Jack Sparrow in Pirates of the Caribbean: Dead Men Tell No Tales, but for the moment he has returned to his theatrical roots, sort of, with The Daughter, a reworking of Henrik Ibsen’s The Wild Duck, by Simon Stone.

“Simon is the enfant terrible, if you like, of Australian theatre,” says Rush. “About six or seven years ago, he was just out of drama school and he put on a version of Chekhov’s first play , Platanov. And it was classical and faithful. But entirely fresh and electrifying. I saw his Thyestes by Seneca. Nobody wants to see Seneca. It’s box-office poison. But it was mind-blowing. Then I saw his Wild Duck. So when the film version came up, I said, ‘I’ll play the duck if you want me to’.”

The Daughter, as befits its source, makes for properly searing family drama. Henry (Rush) has invited his estranged son Christian (Paul Schneider) to attend his marriage to a much younger woman (Anna Torv). The aloof patriarch’s closure of the local mill has already created much ill-feeling. And that’s before Christian reveals a certain family secret.

“I’m now in the market for patriarch roles,” Rush says. “I used to be Lear’s Fool; now I’m Lear. But this was otherwise a very different role for me. It was very muted and introspective. My agent was surprised. Which I think was a compliment.”

Next month, Rush will be rather less muted as Ra, the Sun God, in Gods of Egypt. The CG bonanza was much-maligned on its US release earlier this year.

“Let’s be honest: it bombed,” he says. “But I really admired the director, Alex Proyas, who took on the film after his adaptation of Paradise Lost fell through. And I loved that it was completely original. You can’t say that about many films nowadays.”

The Daughter opens on May 27th

‘How happy he was’: Candid David Bowie photographs by his childhood friend Geoff
3 Family deals with its loss as serial killer still roams free
4

Michelle Obama: ‘It hurt me sometimes to think that Barack was not content with our life’
10

‘How happy he was’: Candid David Bowie photographs by his childhood friend Geoff
3 Family deals with its loss as serial killer still roams free
4