More than 80 years on, Browning’s tale of carnival ’freaks’ taking hideous revenge has failed to become even the tiniest bit respectable 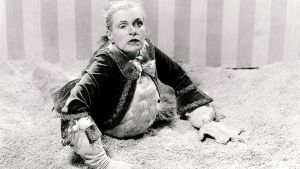 You will occasionally hear suggestions that Tod Browning’s Freaks (presented here in a new digital restoration) was “ahead of its time” or some such tommyrot. Banned in the UK for 30 years, shafted by the critics on release, the picture didn’t become part of the canon until rediscovery by the midnight movie crew in the 1960s.

That much is true. But, in truth, 1932 was about the last point in cinema history that a major studio would have been able to make such a picture. Two years later, the Hays Code began to bite. In the current era, concerns about depictions of disability would shunt any such script towards the “ancillary” grindhouse.

Yet this tale of carnival “freaks” taking hideous revenge was produced by MGM under the watchful (and apparently approving) eye of boy-genius Irving Thalberg. It’s like old news from an alternative universe.

As fans of The Ramones – whose “Gabba! Gabba! Hey!” refrain originates here – will know, Freaks begins with a woman encountering an unsightly exhibit at a travelling sideshow. The barker explains that the creature in the box was once a beautiful trapeze artist called Cleopatra (Olga Baclanova). We then hear how she betrayed “a midget” and attracted the wrath of his colleagues: a “half-woman, half-man”, “Siamese twins”, the “armless girl”.

This durably horrible film is, at its heart, on the side of the freaks. And yet, in the post-politically correct world, the piece could stand as an exemplar of the “problematic” text. Cast almost entirely with genuine sideshow performers, Freaks doesn’t soften its language when describing the characters’ conditions. Their response to perceived abuse trawls in the murkiest depths of Gothic lagoons.

Put simply, Browning’s greatest film – better even than his Dracula – manages something almost no other contemporaneous classic can claim. Over 80 years after its release, it has failed to become even the tiniest bit respectable. That’s a feat worth savouring.