Eye in the Sky review: Rickman and Mirren caught in the moral crosshairs of drone warfare 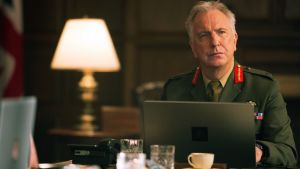 Final film: Alan Rickman in Eye in the Sky

Film Title: Eye in the Sky

What was it Samuel Goldwyn said about Western Union and messages?

A few years ago, Andrew Niccol’s Good Kill, set among the US officers who pilot remote drones, offered us a lengthy, crude lecture on the evils of killing from another continent. Disembodied senior voices corrupt vulnerable operatives in the pursuit of cynical agenda. You know the sort of thing.

In contrast, Eye in the Sky is less a lecture than a debate. The film could hardly be more schematic. Even John Bunyan might have balked at the way in which characterisation is overpowered by the need to represent points in the argument.

Yet the film powers forward more effectively than Good Kill ever managed. In large part, this is because, profiting from promiscuous research, the busy script barely allows the conflicted viewer time to process the contrivance. It also helps that Gavin Hood, director of Tsotsi, proves himself an eager disciple of Hitchcockian tension. No explosions occur without us knowing there is a bomb beneath the table.

We begin in an Islamic corner of Nairobi where a bicycle repairman is teaching Alia (Aisha Takow), his young daughter, how to read. When a member of the local extremist group calls round with a broken chain, he hurriedly throws the books beneath a cushion. You can see where this is going. The girl – actually seen dancing the hula hoop in idyllic slow-motion – is set to become the symbol of what we (and they) are all fighting for.

A few blocks away, an American convert is meeting with radicals who look to be planning multiple suicide attacks. In the home counties of England, Colonel Katherine Powell (Helen Mirren) commands the mission to destroy the safe house.

Eye in the Sky cuts adroitly between four main locations. Out in the wilds of Nevada, two junior officers (Aaron Paul and Phoebe Fox) control the drone that will deliver the payload. In a London basement, British politicians and senior military brass worry over whether to authorise the strike.

On the ground in Nairobi, Barkhad Abdi plays a local agent charged with surveillance. Meanwhile, Colonel Powell fumes as only Dame Helen can fume. The conversations become increasingly heightened and emotional as Alia sets up her bread stall right next to the target. A successful strike may save dozens targeted by the suicide bombers, but it would definitely kill this one innocent.

At times the script is shamelessly, unforgivably on the nose. It takes real effort not to squirm when we see General Alan Rickman – disconcertingly robust in his last significant performance – buying a doll for his granddaughter before debating whether to detonate missiles near another, equally blameless young girl.

Guy Hibbert’s script is, however, rather brilliant at teasing out the logistic tensions that surround such decisions. The senior military officers, as represented by the unflinching Mirren and the exasperated Rickman, efficiently accept the chilling mathematics and press for an assault. The brief glances of US lawmakers suggest an administration unconcerned by such niggles about collateral damage. The British politicians – who could have stumbled straight from The Thick of It – seem addicted to bureaucratic nuance and restrictive procedure.

Whereas Zero Dark Thirty kept a poker face that allowed the film to play as propaganda for both red-meat hawks and appalled doves, Eye in the Sky is firm in its didactic commitment to ambiguity. Its answer is that there are no answers.

In one regard, however, the film offers an implausibly optimistic angle on the “war on terror”. If so many people in so many corners of the defence establishment are habitually so concerned about the fate of every distant civilian then we are in safer hands than we feared. I’m not sure I believe it.

A cracking suspense flick, for all that.