Extinction: sci-fi made in a cardboard box with a dry ice machine

Review: This is Netflix's latest big buy, but budgetary constraints tell throughout in this lesser dark skies effort 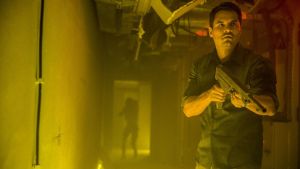 Extinction, arriving hot on the heels of The Cloverfield Paradox and Annihilation, was originally scheduled for release in January through Universal Pictures but instead is the latest headlining acquisition for Netflix.

The streaming giant is fast becoming the home of new science fiction, a welcome development, even if it does suggest that superheroes have entirely colonised the theatrical circuit.

Extinction has had a long and arduous development. Spenser Cohen’s original screenplay featured on 2013 Black List of the year’s best unproduced scripts in Hollywood. James McEvoy and director Joe Johnson were attached to the project as recently as 2016, only to be replaced by Michael Peña and Brad Young, respectively.

Peña stars as Peter, a father who has a recurring dream of losing his wife (Caplan) and his two daughters, in an impending alien attack. Cue lights in the sky, fire on the streets, and intergalactic marauders.

“Why are you here?” screams Peter, as various friends and neighbours are disintegrated.

Why, indeed. For almost an hour, Extinction is a largely ineffectual alien invasion picture that leaves one wondering how they managed to cast two Marvel players in Michael Peña of Ant-Man and Mike Colter of Luke Cage.

Budgetary constraints tell throughout. Although shot in Serbia, for long stretches Extinction might have been filmed in a cardboard box with a dry ice machine. CG fires generate no heat. There are pound-store Predator costumes and unconvincing sets. The fight choreography is scrappy. The kids are noncharacters who shout such makeweight dialogue as “Leave our daddy alone!” Ben Young, who directed the queasily effective abduction thriller Hounds of Love, displays little of the nervy genre timing that defined that film.

The third act, however, springs a neat surprise that turns a lesser dark skies picture into harder, engaging sci-fi. Peña, who is as glum here as he is lively in the incoming Ant-Man and the Wasp, is impressive. Caplan and Colter add further gravitas, as does a soulful Israel Broussard channelling younger Robert Pattinson.