Evanna Lynch: ‘I found that it was a way of getting attention that I could control’

The star of My Name is Emily talks about battling anorexia as a child, landing the part of Luna Lovegood in Harry Potter, and moving from Termonfeckin to LA to build a career 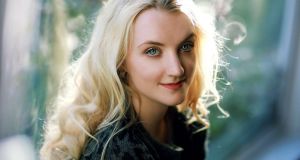 Evanna Lynch: “All I thought about was numbers. I’d open those books and I was free. I loved Luna because she was different”

Folksong and legend (and the occasional tabloid newspaper report) has it that Evanna Lynch was plucked from obscurity by JK Rowling: the Harry Potter author spotted the Co Louth girl at a signing, and, noting the ailing Lynch’s frail appearance, promised her the role of Luna Lovegood if she could just eat something and get well. Other versions have it that, having introduced the character, Rowling came to model her on Lynch, whom she had befriended.

The truth, of course, is rather more complicated. Growing up in Termonfeckin, Lynch, the third of four children born to schoolteachers Donal and Marguerite, was a determined overachiever, the kind of kid, who, in 2008, studied speculative fiction and drama at the Centre for Talented Youth in DCU: “Nerd camp,” smiles Lynch.

She enjoyed an idyllic childhood being “close to nature and surrounded by cows and sheep”, but, by age 11, she had been hospitalised with an eating disorder. She spent the next two years in clinics battling anorexia nervosa.

“It was awful for my mum,” says Lynch. “She wondered: what had gone wrong? Where did this come from? But it wasn’t anything like that. It was a struggle for identity. My siblings are all go-getters, so brainy! My sister got 600 points in her Leaving Cert. That left me wondering: what the hell am I going to do? I have nothing special to give.

“I didn’t plan for an eating disorder. But I soon found that it was a way of getting attention that I could control. People would say: aren’t you amazing that you exercise so much. I was hungry all day, cold all day. But the punishment made me feel worthy.”

She pauses: “It’s funny. Because what I do now is the opposite of control. You’re always exposed.”

Lowest ebb
At her lowest ebb, she had just one escape from the world of obsessive world of calorie counting she constructed for herself: Harry Potter and in particular the character of Luna Lovegood.

“All I thought about was numbers. I’d open those books and I was free. I loved Luna because she was different. She wasn’t making a statement or doing it to be defiant. And she didn’t feel out of place because she wasn’t judging herself or others. I’d read her and I’d feel safe and relaxed. I didn’t think: Oh, she’s just like me. I thought: I want to be just like that.”

Before her teens she had entered into correspondence with Rowling: “I wrote to her publisher. I guess they picked out the letters she might find interesting. Or maybe she saw something of herself in me. But she wrote back. We stayed pen-pals. And we still are.”

Nabbing the much-coveted role of Luna happened outside of the epistolary relationship. Rowling had offered Lynch work as an extra but Lynch declined as she had decided to hold out for a shot at playing her favourite character. Rowling had also passed on to her the address of the relevant casting agent, yet Lynch landed the part through an open casting call and a series of call-backs.

“The producer told me that she [Rowling] saw my name on the list of people who had been cast and went to check it was the same address she had been writing to. I hadn’t told her because it all happened so quickly.”

The Harry Potter sequence would bring automatic global recognition and enough of a salary that Lynch can afford to be choosy in her roles: “I had to find that out for myself,” she says.

“For a while I thought I better take this role or I won’t get to act again. Harry Potter spoils you a bit. You’re working on something that everyone wants to be good. You can’t fail, really.”

She had a tough time working on the 2013 British stage tour production of Houdini, in particular. “I’m really grateful for the experience. I don’t mean that in a wishy washy spiritual way. On the play there were people who had all these ideas but they couldn’t or didn’t know how to execute them.

“At one point I had to pretend an empty water tank was full when it was empty because the stage couldn’t support it. And I realised: this is going to be terrible and there’s nothing I can do about it. The actors banded together, saying: come on, people paid for this, our families are here, and we have to give something. And I learned a valuable lesson about seeking out the right people to work with.”

The right people
The right people include Simon Fitzmaurice, the writer and director of My Name is Emily, a new coming-of-age road movie featuring Lynch in the title role. Shortly after his second short film The Sound of People premiered at the 2008 Sundance Film Festival, Fitzmaurice was diagnosed with motor neuron disease, a degenerative neurological condition.

“Simon was on set all the time,” says Lynch, who came back to Ireland from her Los Angeles home to shoot My Name is Emily.

“He fought for his right to direct, fought for his chair. I had to learn to get comfortable with silence. Sometimes I’d sit down with him, open a vein and let all my raging insecurities out. But he might only have time to say: yes or no. So I had to get it into my head that he trusted me to do the job. And that was really empowering. I realised how much I depend on other people’s responses. I realised I need to be more confident.”

She laughs: “But even as I’m talking to you right now, I’m looking for you to nod.”