Emmanuelle Riva: ‘I thank heaven for the child that’s still in me’

Sixty years after she started as an actor, the star of ‘Hiroshima, Mon Amour’ and ‘Amour’ is still impressing audiences 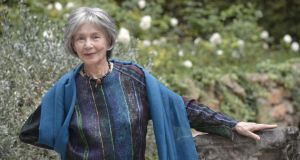 Emmanuelle Riva: age has not withered her fine acting, the expressiveness of her face or the clarity of her diction. Photograph: AGF/Rex 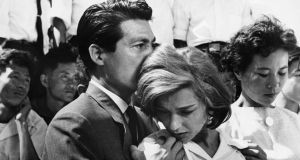 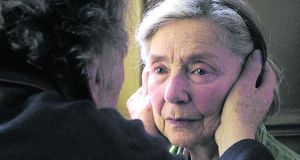 The lovers caress one another, meld, separate and meld again in a moving sculpture, their bodies symbolically coated with ash, in an allusion to radioactive fallout from the atomic bombing of Japan. “You are Hiroshima, mon amour,” the French woman repeats.

Throughout Alain Resnais’s new-wave masterpiece, shot in Hiroshima in 1959, images of the handsome couple alternate with those of burnt and deformed bodies, in a juxtaposition of love and the horrors of war.

Fourteen years after the end of the second World War the nameless French woman shares her secret with her Japanese lover. At the age of 18, in the provincial town of Nevers, she had fallen in love with a German soldier. Shortly before Hiroshima was bombed, halfway around the world, she became one of an estimated 20,000 tondues, French women who were publicly humiliated by having their heads shaved for sleeping with the enemy.

Hiroshima, Mon Amour saw the debut of three giants of French cinema: Resnais as a maker of feature films, Marguerite Duras as a writer of screenplays and, as the actor who played the unnamed French woman, Emmanuelle Riva.

Resnais died last March, at the age of 91. Duras passed away in 1996. To paraphrase the title invented for her great friend Jacques Brel, Riva is alive and well and living in Paris. She will turn 88 on February 24th.

Age has not withered Riva’s fine acting, the expressiveness of her face or the clarity of her diction. She retains her mystery. In 2012 the Austrian director Michael Haneke sought her out to play Anne, a retired music teacher whose husband, George (Jean-Louis Trintignant), cares for her after a stroke.

Amour won a host of international prizes, including the Palme d’Or, at Cannes, and the Oscar for best foreign film. At 85 Riva became the oldest nominee for the best-actress Oscar, and her performance won a host of other awards.

“Hiroshima when I was 32, Amour when I was 84 . . . These were such splendid presents, more than 50 years apart,” Riva says when we meet in her Paris apartment.

“In both cases I knew that I was ripe for the role, which arrived exactly at the right time. I would have lost something immense if either role had escaped me. But I got them both, and that is a great source of happiness.”

Riva has kept Duras’s original screenplay for Hiroshima. “When I read it I jumped for joy. It was a pure marvel.”

Duras, who was already a well-known novelist, coached Riva for the part. “She was like a ball of fire with the softness of ashes,” Riva says. “She had that about her: burning, death, love – which is always there, in Duras. Even in the most extreme case of absolute destruction, love grows like a plant from the earth.”

Amour was shot in studios at Boulougne-Billancourt, west of Paris. The traffic was so bad that Riva asked to sleep in her dressing room during the two months of production. “They gave me a telephone and a radio and prepared evening meals for me. I danced in my dressing room and took long walks by the Seine. I was very happy.”

Riva says she nearly ran from her dressing room to the set, “so great was my desire to become the other, and especially to please the director . . . I wanted to surprise him . . . One is very happy when one surpasses the director’s expectations.”

Riva loves the teamwork in cinema, that feeling of being adopted by the crew. For the sake of vérité she lived out the physical and mental deterioration of a dying woman on camera. She laughs as she recounts how she shivered with cold when she stood, naked, to be washed in the bathtub, as if to say: it’s only a movie.

“The death scene wasn’t difficult, since I was dead,” Riva says, laughing again. “I know it was hard for people to watch, but my only fear was that he might really suffocate me, and they couldn’t finish the movie.”

One scene brought the crew to tears. “When they turn her over in bed and put nappies on her, she realises her humiliation. I was no longer myself. I became the other. I saw tears in Haneke’s eyes.”

A scene with an electric wheelchair frightened Riva most. “The button was ultrasensitive, and I was afraid of crashing into the wall. In the film she is angry, weeping. She wants to throw herself out the window, but she cannot, and he finds her on the bathroom floor.”

I note that Amour was a positive experience for Riva, despite the tragic story. “There is no ‘despite’,” she corrects me. “The subject is important to all of us. It spares no one. Some people couldn’t watch the film because they feared it would be too traumatic. Others said it gave them strength. I received mountains of letters.”

Although Riva is best known for Hiroshima and Amour, she has worked steadily for 60 years, acting in 53 films and 36 plays. She speaks often of her role in Thérèse Desqueyroux (1962), for which she won the Volpi Cup at the Venice film festival, as François Mauriac’s ill-fated, vulnerable and rebellious heroine.

In 2014 Riva returned to the stage after a 13-year absence, in Savannah Bay, written by Duras. Coming so soon after the global success of Amour, “It was the peak of the miracle,” she says. “I thought I didn’t want to do theatre any more, because when you’re old it’s as perilous as walking a tightrope. You have to be physically fit. You have to have a good memory. But I couldn’t say no.”

Riva is not the only elderly actor to have triumphed onstage in 2014. By mid December at least a dozen actors between their late 60s and late 80s were starring in plays in Paris, including Robert Hirsch and Michel Bouquet, who are both 89.

“We’re not dead yet,” Riva says, laughing. “Don’t worry:we’ll get there . . . It’s not because we’re old that we don’t have talent; on the contrary . . . It’s as if a distillation of what is essential seeps out of us, a sort of intimate solution that we share with the audience.”

Riva seems to like photographs of herself in old age as much as the glamorous publicity shots of her youth. “You change internally,” she says. “That gives a different light to your face, to the look in your eyes . . . When you are approaching age 90, 80 suddenly seems very young. When you passed the gateway of 80 you found you knew things you hadn’t suspected. It goes by decades. Seventy seems extremely young to me now.”

Riva has lived in the same fourth-floor walk-up on a noisy street in the Latin Quarter for 54 years. It has a Bohemian feel, with a heady scent of exotic oils, piles of seashells and autumn leaves, oriental furniture and quotes from famous writers scribbled in white chalk on the slate fireplace. “I’m not bourgeois. I’m not from bourgeois stock,” she says.

A peasant, a worker, an artisan

She was in her mid 20s before she overcame her parents’ objections and moved to Paris. In her new book, C’est Délit-Cieux!, Riva describes herself as “a peasant, a worker, an artisan”.

She never wanted to marry. “I’m not cut out for domestic life. I was afraid of disappointing the other . . . I was a little girl from the provinces, and I started my career late. If I had married, my life as an actor would have ended. If you have children, you have to look after them. People want you to get married and have children. They want to enlist you, for you to be in the norms. Acting got under my skin, this way of life. My profession keeps me alive. They should understand that.”

Although she is deeply affected by all that is wrong with the world, by “the abominable massacre of humans, animals and plants”, Riva is happy in her own life. The offers of theatre and cinema roles keep coming. “Our little cinema and theatre projects are tiny, tiny, compared to the enormous threats to the world,” she says.

“But one continues one’s life, nonetheless. I thank heaven for the child that’s still in me. I love freshness, the surprise of waking up alive every morning, the wonderment of simple things.

“This still exists, despite our stubborn, insolent attempts to destroy this beautiful, beautiful planet.”