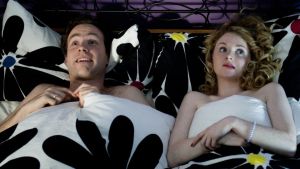 Lovelorn Joe Norman (Rafe Spall) is working in a comic book store when he first meets he meets Maria (Jenn Murray), a lively, pretty blonde with a collection of unlovely “action figures” to unload.

Could a girl like Maria ever go for someone like Joe? The intergalactic mating compatibility doodah Joe wears around his wrist says “yes”: Maria is indeed one of those rare earthling females capable of reviving Joe and his dying species.

If only Joe’s late father (David Morrissey) was still around to advise. But he exists only in incomplete transmissions and in Joe’s memory. Could it be that dad, a failed sci-fi writer anxious to alleviate the 11-year-old Joe’s fears, concocted this entire alien fantasy on his deathbed? Is Joe delusional or simply in need of some deep space back up? Dr Richard Webb (Stephen Hogan), Joe’s chief love rival and – conveniently – his psychiatrist is soon on the case.

Arriving in the jet stream of Zonad and Grabbers, Earthbound is the third film since 2009 to find Irish uses for 1950s B-movie pastiche. Brennan’s debut film simultaneously shares DNA with last year’s Death of a Superhero: both are proudly pop literate and share a fantastical take on childhood loss.

Brennan’s cutesy-pie sci-fi romcom, the Audience Award winner at last year’s Galway Film Fleadh, is pluckily promiscuous when it comes to picking a genre. Unhappily, this leaves the film stranded between intentions. It’s not quite funny enough to be an outright comedy. It’s never deep enough to function as psychodrama. It’s science fiction but only in the way that Pigs in Space on The Muppet Show is science fiction.

That’s not to say there aren’t things to like here. Spall has fun with his mannered, goofy central turn. PJ Dillon’s cinematography veers into a lurid shade of DayGlo. The director – until it all goes a bit mad in the final reel – does deft things with Joe’s paranoia and keeps the audience guessing about his state of mind.

The Man Who Killed Don Quixote: Compromised and astonishingly unfinished
5