As an original member of John Waters’ gang, Mink Stole was there at the beginning. Alongside was Harris Glenn Milstead, a quiet young man who would soon become Time Magazine’s Drag Queen of the Century . . . and an icon for oddballs everywhere 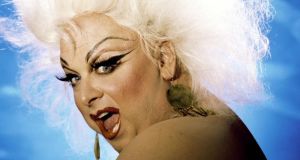 Harris Glenn Milstead, better known as Divine: "He went for funny. He went for strange. He went for interesting. But he was always fabulous" 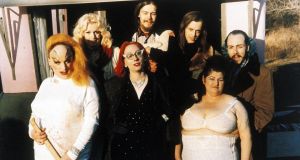 The Dreamlanders, including Divine (front left), Mink Stole (front centre) and John Waters (back 3rd from left) on the set of Pink Flamingoes 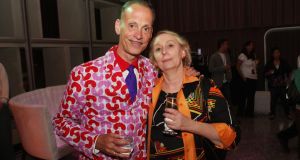 John Waters and Mink Stole in 2007: ‘We would all love another movie. If they could just throw 10 million at John’

It was an act that would propel Waters and his regular troupe of Baltimore misfits – the Dreamlanders – onto many ‘Movies You Must See Before You Die’ compendiums: Flamingos landed at number 29 on a 2006 Channel 4 list, just ahead of Scarface and Fight Club.

I can’t imagine what conversations the über-fabulous Mink Stole, an original Dreamlander who played Divine’s filthy and finally defeated nemesis, had on set that day.

“We didn’t really have any particular conversation about it,” recalls Stole. “John told us what to do and we did it. There was no dissent. I wanted to play Connie with a little bit more nobility. I wanted some kind of final line or final look that would define her as being more than just the low-life piece of trash that she really was. But John was adamant.”

Stole is one of only three Dreamlanders – the others being Mary Vivian Pearce and Pat Moran – to have featured in all of John Waters’s feature-length films. She was, by the director’s recollection, “punk 10 years before any one was punk”.

Did that happen after Stole fell in with the other Dreamlanders, I wonder? Or was she always destined to be an oddball?

“Oh, I was always an outsider. I was one of 10 children. We were Catholics in the 1940s and 1950s when there wasn’t any birth control. I’m number five. Kind of a middle child. And even among that large crowd of people. I always felt a bit isolated.”

That sense of isolation manifested as strops and foot-stomping before Stole would find her place in showbusiness as an actor, a writer and a singer: her most recent album, Do Re MiNK, is highly recommended and available from all good online emporia.

“I was a very unhappy child so I threw lots and lots of temper tantrums, the last refuge of the unhappy child. I screamed a lot. That didn’t make me any more popular with my neighbourhood or family. I had very little by way of coping skills. I was kind of a clueless kid.”

Happily, during the mid-1960s, the teenage Mink Stole – or Nancy Paine Stoll, as it says on her birth certificate – would happen on a group of like-minded reprobates, including fellow fallen Catholic Waters and Harris Glenn Milstead, a beatnik who would, under Waters’s tutelage, go on to become Divine, Time Magazine’s Drag Queen of the Century.

Playing with his Yorkie
“I met John when I was 18 and that fall I met Divine. My memory is that I met Divine at a party,” Mink says. “I was stoned on acid. He was draped in a sheet and playing with his Yorkie. But there’s also a scene like that in the first movie that we did. It was 50 years ago! My memories are a little messed up. But I do remember that when I fell in with these people – as you say – I thought: ‘Oh my God, this is fabulous’. We had certain shared anti-values. We just clicked.”

By 1969, Waters had set out his stall with several shorts (Hag in a Black Leather Jacket, Eat Your Makeup, The Diane Linkletter Story) and his debut feature, the experimental foot-fetish musical Mondo Trasho, starring Stole, Divine, Mary Vivian Pearce, and David Lochary.

For the original personnel, the term would become a “badge of honour” across such superbly outré pictures as Female Trouble, Desperate Living, Serial Mom, Cecil B DeMented and A Dirty Shame.

But what, apart from the name of Waters’s production company, defines a Dreamlander? There’s certainly a sense of a shared aesthetic, one that has earned Baltimore’s most distinguished auteur such monikers as The Prince of Puke and Your Filth Elder. Or as William S Burroughs famously put it: “The Pope of Trash”.

“I think I’ll take trash,” notes Stole. “When I think of filth outside of our own context, I think of smut. And we’re not smutty. We were never smutty. It was really all down to John. I truly believe if he had lived in any other city, he would have still found people. Because he really was the centre of everything. He was the writer, the producer, the creative centre of our world. I suppose he was lucky to find us. We were definitely . . . individuals. But I think that he would have found others.”

Perhaps. But then it’s almost impossible to picture any John Waters film – even the later, more accessible ones such asCry Baby, Polyester and Hairspray (which would go on to inspire the wildly superior musical) – without those Baltimore-based miscreants. Or, indeed, without Baltimore itself. There must be something in the water, surely?

“I suppose Baltimore is a bit like us,” says Stole. “Baltimore has always been an outsider city. It has an inferiority complex. It measures itself against other places. When they read out the national weather, they talk about Washington and Philadelphia and they just skip over Baltimore. We get overlooked a lot. There’s plenty of culture: we have symphonies and museums. But it was never really a destination. It’s also quite working class with very segregated neighbourhoods. I presume most cities are like that. But it’s very true of Baltimore.”

The latest excavation of the Waters and Dreamlanders milieu is I Am Divine, a wildly hot doc from award-winning director Jeffrey Schwarz. Drawing on testimony from surviving Dreamlanders and from Divine’s mother, the film chronicles the life of Harris Glenn Milstead from his privileged, conservative upbringing to his later years as Waters’s leading lady and a HI-NRG disco star. Milstead died from an enlarged heart in 1988, just as he was due to join the cast of hit sitcom Married with Children.

“Not at all,” she says. “I meet people all the time who talk about Divine. I have a lot of friends who do drag, and for them, he is very much alive. Twenty-seven years later he’s out there in hearts and minds for a lot of people.”

“Because he was the first famous drag to be fat, to be odd looking and to celebrate those things,” Stole ponders. “He went for funny. He went for strange. He went for interesting. But he was always fabulous. He opened doors for people. He opened minds. Divine was a collaboration between John and David Lochary. But only Divine had the charisma and the star power and the self-confidence to carry it off. It really rather astonishing that this kid from Baltimore became this international phenomenon. It was magical.”

Stole has appeared – away from her fellow Dreamlanders – in films as diverse as David Lynch’s Lost Highway and Gregg Araki’s Splendor. Still, in common with most cinephiles, she would love to see the old crew back together. It’s been 10 years since Waters’s underrated A Dirty Shame hit theatres with a nice, nasty smack. What gives?

“Well, I have his permission to say this: he can’t get the money. We would all love another movie. And when you think of all the money that they spend on these blockbusters. If they could just throw 10 million at John.”

Someone? Anyone? Pretty please?

Young, glamorous socialites who indulged in every excess
9