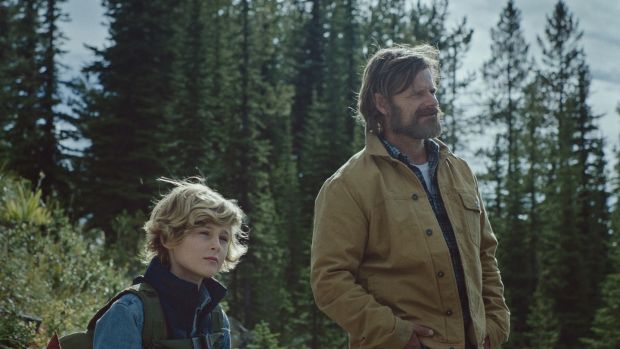 Anna Kerrigan makes some admirable choices in her treatment of a child going through gender transition – a hot topic if ever there was one. It is Sally (Jillian Bell), the hard-working, caring mother, who wonders if young Joe (Sasha Knight) might not just be playing out. Who wouldn’t want to become a man in this patriarchal environment? “I don’t let her go out of the house like that,” she says of her “tomboy”, who has taken to jeans and cowboy hats. It is deadbeat dad Troy (Steve Zahn), a drunk with a line in hopeless fantasy, who takes the child’s aspirations seriously. Joe feels as if an alien has dumped him in a girl’s body. Not much at home in the world himself, Troy makes a connection that Sally at first can’t manage.

The tensions come to an extreme edge when Troy borrows a horse from a friend and takes the kid on a quixotic journey towards the Canadian border. Cowboys turns into a low-key Lonely Are the Brave as hard-working Detective Erickson (Ann Dowd, yay!) seeks to track down the pair before anything too awful happens. Shot on a limited budget – helicopters appear only on the soundtrack – the film makes decent use of its locations, even if the wide-open spaces seem a little less wide in the immediate aftermath of Nomadland. The actors are excellent: Zahn is a master of the confused loser, Bell moves on from Brittany Runs a Marathon to create a confused woman genuinely trying to do her best. That interesting quirk of having the irresponsible partner educate the more grown-up parent adds unexpected dynamics.

The film does, however, make a few too many clunky decisions elsewhere. Of course, such a drama is set in the area of the United States – well-spaced Montana – most at home to demonstrative masculinity. The scene in which Joe, still dressing as a girl, looks enviously at men strutting about the bowling alleys feels just a little on-the-nose. The main characters’ story arcs end more neatly than those in a compendium of moral fables.

Cowboys nonetheless gets by on goodwill and a passion for compromised Americana. Only a lowdown dirty heel would cuss it out.

Video on demand from May 7th