The South Africa-born actor has always commanded respect by sticking to her guns and going against the grain. So how does an Oscar winner end up starring in Ted guy Seth MacFarlane’s new gross-out comedy western? 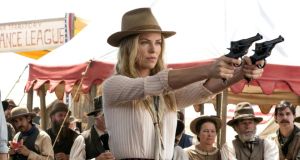 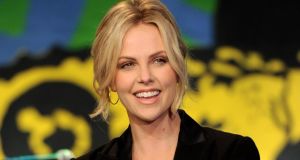 Actor and producer Charlize Theron walks up to me looking like . . . well, do you really need me to tell you she wasn’t exactly hammered with the ugly stick?

Anyone who encounters Theron uses words like “stunning” and “statuesque”. And then there’s the perfect red lipstick (none on her teeth, obviously) and the silky hair (wrangled and golden). A deft shimmy folds her into a perfect perch on the edge of a sofa, a heavily cushioned affair seemingly designed to make most mortals flop indelicately. That must count as a 10.0 dismount, surely?

Before we can begin chatting, an assistant, possibly a specialised shankologist, checks how her legs look from the front and the side: said limbs do go on for a bit and require some degree of management.

A former dancer and model, Theron ought to be 10 kinds of girlie. But that’s not her at all.

“I’m a 50/50 split person,” she say. “There has always been a part of me that wants to climb trees and ride motorcycles and run around barefoot and loves fast cars. But I was always a kid who loved putting on my mom’s heels and trying on make-up and all that stuff. I’m a very willing participant in both camps.”

Many commentators write about Theron’s South African childhood like it’s a superhero origins story, but they’re not too far off. The descendent of hardy Boer pioneers and Huguenot settlers – her great-great uncle was a commander at the Battle of Spion Kop – Theron was present when her mother shot and killed her father in self-defence.

Within a year, the 16-year-old won a modelling contract that brought her to Milan and then New York, where she attended the Joffrey Ballet School. Her dancing career was ended by a knee injury. She was in a funk. But not for long.

“Once I lost that, I had to sit down and analyse why I loved dance so much. And that’s when I discovered it wasn’t really dance at all. It was storytelling. For years, I could do that through dance. I would get on stage and even though I was never technically the strongest dancer, I succeeded in it because I could transform into a swan or whatever.”

She swears she’s not all about triumph over adversity: “I can complain about stuff as much as the next guy. I’m not tough and cool about things all the time.”

And yet Theron’s career forms an “against all odds” arc to rival any of her movies. Within five years of a 1995 inauspicious screen debut in Children of the Corn III (1995), she had worked with Tom Hanks (That Thing You Do!), Al Pacino (The Devil’s Advocate), Woody Allen (Celebrity), Johnny Depp (The Astronaut’s Wife) and Robert Redford (The Legend of Bagger Vance).

In 2003, she took things up a notch as the star and producer of Monster, the Aileen Wuornos biopic that won her an Oscar, a Golden Globe and a SAG award. Much was made of the 30-pound weight gain and prosthetics required; much has been made of her subsequent physical transformations for the screen.

The constant focus on her appearance can be tedious, she says. “When people talk about that in this isolated manner, it starts to sound like its schtick. And it’s not schtick. It’s part of the job. It’s interweaved with performance and story and all that stuff. If you break it away and just focus on that one aspect, it sounds like dress-up. That can bother me a little.”

Fair enough. After all, nobody could fault Charlize Theron for effort. She throws herself into her roles with a drive and intensity: she herniated a disc in her neck filming Aeon Flux (2005) and injured her vocal chords filming the labour scenes on The Road (2009). She’s a go-getter, right?

She speaks like she looks: elegantly and flawlessly and without a trace of her native Afrikaans. That’s what I think: she insists she’s just getting by.

“Sometimes people think I can speak English perfectly,” she laughs. “And then I’ll make some basic grammar mistake and they’ll be really shocked. I only learned the language at 19. And I do this horrible thing where I take a phrase and translate directly from Afrikaans and hope for the best. And that can sound very bizarre. People turn around and go ‘the camel and the horse do what on the roof?’ And I’m like, ‘Oh, you don’t have that saying?’”

She has a particular affection for Ireland: when we meet in London, she’s expecting a gaggle of her Irish friends to descend the next day. In 2009, during the rehearsal for the 2010 Fifa World Cup Draw, she called out Ireland instead of France, a little dig at the expense of Thierry Henry’s famous handball.

“That was only fair. But you should have seen them. They were so panicked about it. They really, really thought I was going to do that on the day. I gave them all a heart attack.”

A committed activist, Theron has long campaigned for animals and Peta and same-sex marriage. She was close to the late Nelson Mandela and attended his memorial service earlier this year. “It’s so sad,” she says. “It wasn’t a surprise. But that doesn’t take away the sadness of it.”

She has referred to her recent screen work in Prometheus and Snow White and the Huntsman as her “bitch period”. And now for something completely different. Seth MacFarlane’s A Million Ways to Die in the West sees Theron tutoring MacFarlane’s cowardly sheep farmer in the art of the shootout.

Theron has starred in comedies before, notably Jason Reitman’s darkly humorous Young Adult. But A Million Ways is the first time she has worked with horseshit gags. The comedy western follow-up to MacFarlane’s wildly successful Ted is very much in keeping with the R-rated tone MacFarlane’s TV hits, Family Guy and American Dad.

“I love those shows. I’ve been a massive fan for many years. Apart from anything else, you felt like you had to watch them because he was shaking things up. He plays by his own rules. He’s like this uber-talented Renaissance man. I never wanted to go make a comedy just for the sake of it. But I love R-rated comedies. So it felt like a natural fit for me.”

It is, despite her prolific career, the closest Theron has ever come to playing a conventional romcom heroine, I note.

“Yeah. But at the beginning my career just naturally took a very dramatic turn. And when you started in a dramatic films, you stayed in dramatic films. And I was very happy there. Creatively speaking. I think today it’s a little different. That barrier has been broken. People don’t necessarily think that a dramatic actor has to do drama all the time. Ten years ago, 15 years ago, there was definitely an idea that you don’t play on my field and I won’t play on yours.”

Was her process any different?

“Well, it’s weird. Comedy is harder than drama because drama is very general, whereas comedy is very specific. We all have a sense of humour that determines if we find something funny or not. And that can vary wildly from person to person.

“But I actually didn’t have to do a lot other than service the story. There was a time when I thought – and I think all actors get this – that unless you’re completely submerged in a role, unless you’ve completely transformed yourself physically, and found a voice that is not your own – then you’re not doing your job right. This was a bit of a revelation. Because I didn’t have to do any of that stuff. When I watched the movie, I could definitely see me on screen.”

Theron has a son, Jackson, whose adoption was announced in March 2012. Has that had an impact on her work, I wonder?

“Not so much. He’s really young right now. He’s not in school. So he gets to come on little adventures with me. He loved the set for this movie. There were so many animals around and lots of dirt. And beyond that, it’s somewhat effortless because I don’t ever for a second question it.

“I’m very lucky. I’m in a position where if I don’t want to work I don’t have to. It’s a really nice place to be and I don’t take that for granted. Not for a second.”