Cannes Diary: Godard phones it in and Christopher Nolan declares his undying love for film 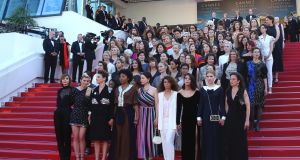 A total of 82 female film professionals linked arms on the steps of the Palais at Cannes while Cate Blanchett, this year’s jury president, read out an impassioned statement. “Women are not a minority in the world, yet the current state of the industry says otherwise,” she said. Photograph: Joel C Ryan/Invision/AP

The busiest talking point of the festival so far was the statement in support of female representation that occurred before the premiere of Eva Husson’s Girls of the Sun on Saturday evening.

A total of 82 female film professionals linked arms on the steps of the Palais while Cate Blanchett, this year’s jury president, read out an impassioned statement. The numbers were significant.

In the 71 editions of the Cannes Festival, just 82 women have competed for the Palme d’Or. (Do the maths and you’ll conclude that this year’s total of three is significantly above the pitiful average.)

In contrast, 1,866 men have had their films in competition. Kristen Stewart, Marion Cotillard, Ava DuVernay, Léa Seydoux, and Salma Hayek stood on the highest step with Blanchett. “Women are not a minority in the world, yet the current state of the industry says otherwise,” she said.

“As women, we all face our own unique challenges, but we stand together on these stairs today as a symbol of our determination and commitment to progress. We are writers, producers, directors, actresses, cinematographers, talent agents, editors, distributors, sales agents and all involved in the cinematic arts.”

The protest comes after accusations that Cannes has not reacted forcefully enough to the #metoo scandal. A change is gonna come.

Jean-Luc Godard is on the phone

In the last decade, Jean-Luc Godard has presented three films at the Cannes Festival, but on none of those occasions did he turn up to answer questions. That sort of changed this year as he appeared on a smartphone to answer questions via Facetime. It began in wonderfully odd fashion as the traditional opening photocall saw cinematographer Fabrice Aragno hold the phone aloft for the snapping press. “It’s a bit like machine gun fire,” he joked.

Godard was expectedly gnomic on his new film The Image Book and on the business as a whole. One chap brought up his famous maxim that a film needs a beginning, a middle and an end, but “not necessarily in that order”.

Godard was game. “I said that quite some time ago to go against Spielberg and others,” he said. “Of course, I didn’t make this a real hobby horse, but once I drew a parallel: it was an equation, x + 1. A child in primary school can easily understand that equation: if x + 3 = 1, x = -2. And when you produce an image, be it of the past, the present or the future, you have to do away with two images each time to find one really good one. It’s like the equation. That’s the key to cinema, to a good film. But when you talk about the key, you can’t forget the lock as well.”

Today’s “rendezvous with…” was, well, a rendezvous with Christopher Nolan. The queue for the public interview clogged up the Palais for much of the afternoon and, chatting for two hours, the director gave attendees their money’s worth. As ever, he was evangelistic on the virtues of physical film over digital technologies. “Film still stands as the best analogy for the way the eye sees,” he said.

Journalists from around the world took turns standing in front of a mobile phone screen in the press conference room to interview Jean-Luc Godard! A rare moment in the Festival's history! #Cannes2018 #ImageBook pic.twitter.com/zATRlGYGx3

“For my purposes, I find it to be the most immersive and emotionally involving tool for drawing the audience into the story.”

He also talked about his role in presenting a new “unrestored” print of 2001: A Space Odyssey here on Sunday. “I’m very excited to try to give a new generation of film-goers the same experience,” he said.

“What Kubrick did in 1968 – he simply refused to acknowledge that there were any rules he had to play by in terms of narrative.”

Now here’s something we’re all excited about. Well, here’s something we should be all excited about, anyway. Armando Iannucci is moving forward with his adaptation of Charles Dickens’s David Copperfield. Dev Patel is ingeniously cast in the title role and we now learn that Tilda Swinton, Hugh Laurie and Ben Whishaw are on board. Peter Capaldi is to play Mr Micawber. It emerged today that the film has sold almost all foreign rights already at the Cannes market. Lionsgate will distribute in UK and Ireland.

And today’s reviews from the festival...

It remains baffling how certain films end up in certain sections here. Some sort of dice are involved, perhaps. Anyway, the debut feature by Lukas Dhont – a study of a ballet dancer preparing for gender transition – premieres in the Un Certain Regard sidebar despite being the equal of several films by more experienced filmmakers in the main competition. Girl is honest, unsentimental and rigorously researched. It also “has some issues”. But we can’t ask for perfection out of the trap.

Victor Polster is simultaneously fragile and determined as teenage Lara, whom we first meet doing her stretching exercises in the family home. Mention of drugs designed to delay puberty alerts us that she is in the early stages of gender reassignment.

Maybe this just says something about Belgium, but Lara could hardly find herself in a more helpful environment. Her single dad never once questions her decision and never so much as twitches when she snaps or roars. The doctors are equally patient. The pressure comes from her peers. A teacher asks the girls in her class to vote on whether they are comfortable having Lara in female changing rooms. Bullying follows.

The picture is a bit short of plot, but, thanks to a heartbreaking turn from Polster, it remains as gripping as most thrillers. Working the rigours of ballet in with preparations for surgery offers a mirror of the physical stress Lara’s body is about to encounter. Polster tells us with his eyes that Lara hasn’t quite faced up to the hugeness of her choice.

That “he” signals one of those “issues”. Dhont’s decision to cast a cis actor in the role will not please everyone, but few could question the commitment Polster shows. The film is certain to gain distribution, and that question is bound to be further aired.

It’s a shame that Cate Blanchett and her team couldn’t have made their statement in support of women in the film industry at the premiere of a better film. Eva Husson’s tale of female Kurdish guerrillas resisting religious extremists is not exactly bad. But the dialogue is so on the nose and the story so by the numbers that the experience is like watching a rock being thrown off a cliff. No surprises here.

The film almost strays into the trap of giving us a white, western conduit, but Mathilde (Emmanuelle Bercot), a journalist covering the fighters, doesn’t say much after introducing us to the story. Nothing she does say helps dispel the notion that she’s been drawn from the drawer of clichés about war correspondents who’ve “seen too many things”. She’s hard-bitten. She’s worn down. Her only religion is the truth. You know the sort of thing.

It’s hard to say much about the fighters’ characters, as they are defined solely in terms of the tragedies that propelled them towards the webbing and the assault rifle. The wretchedness of nature makes those tragedies – sex slavery, genocide, rape – all too familiar, but Husson could surely have sought new ways to tell awful old stories. The flat linear sub-narratives don’t feel like even first drafts. They feel like scenes written from a sketchy outline for a possible treatment.

Husson does fare better in the action sequences. She has a gift for the hustle and chaos of modern warfare that just about nudges the film towards acceptability. But this is so-so stuff.

Grave thoughts: My obsession with arranging my own funeral
7