Cannes 2018: Could there be an all-female Black Panther? 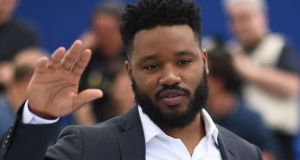 US director Ryan Coogler: These actresses could easily carry their own movie. Photograph: AFP/Getty Images

Ryan Coogler, director of Black Panther, has been enjoying a “rendezvous” (they really do call it that) with the Cannes public as his film continues to eat up the world’s box office. The Weeknd and Raoul Peck, director of I Am Not Your Negro, were among those attending a public interview with Elvis Mitchell at The Buñuel Theatre.

In the course of the conversation, addressing the strong female characters in Black Panther, Coogler pondered the concept of an all-Women Wakanda film. “You feel like you are watching something fresh and new,” he said. These actresses could easily carry their own movie. We had an embarrassment of riches. I would watch a movie with just them. That would be amazing if that opportunity came up.”

They’re not messing about selfies

To the Lumiere Theatre for the red-carpet screening of Jean-Luc Godard’s The Image Book. Once or twice in the festival, the press screening actually coincides with the official posh event. That’s to say we have to go up the same red carpet and sit in the same auditorium as the people in dinner jackets. I can report that the staff really are enforcing the notorious no-selfie rule. I saw at least one fellow approached and (politely, to be fair) asked to put away his phone as he attempted to film his own ascent up the ruby staircase. Signs warn of dire consequences should you dare to photograph yourself hugging any passing celebrities. Once inside, everyone snapped away. As you can see. A strange business.

Speaking to Irish film-makers at the international village, I was told that our film-making friends across the Irish Sea are getting increasingly nervous about the fallout from Brexit.

Unsurprisingly, representatives of the British government are singing a happier tune. Margot James, UK minister of state for digital and culture, has been making like Lance Corporal Jones in Dad’s Army and telling everyone not to panic. “I don’t want to be complacent, but I don’t think Brexit will have a significant effect on the film industry,” she said yesterday. “It won’t affect the studio space; it won’t affect the tax reliefs.”

Ms James specifically addressed concerns that technical personnel would have difficulty travelling to the UK. “I accept that we do need to makes sure the Home Office has a positive immigration policy that enables us to continue to recruit the people from Europe that we need,” she said. “There is no doubt we want the advantages of Brexit, but that we still have access to the talent we need.”

Another day, another Netflix story

No, Netflix didn’t buy Everybody Knows, the opening film at Cannes. But the rumours that the company simply isn’t interested in picking up films at Cannes have been proved false.

Deadline has reported that the streaming giant has paid some $30 million to acquire robot animation flick Next Gen. A Chinese-Canadian co-production, the film features voice-work from David Cross and Jason Sudeikis. This is one of the priciest acquisitions in recent Cannes history. So expect Netflix to flash more cash before the 10 days are up.

And today’s reviews from the festival...

The Image Book
★★★
Directed by Jean-Luc Godard. In competition, 85 min.

It can’t be altogether a good thing when you know what to expect from a proud flouter of conventions.

Brave Jean-Luc Godard fans who have dipped into his massive Histoire(s) du cinema and braved features such as Film Socialisme or Goodbye to Language will, however, be unsurprised by the form and tone of the latest emission from the 87-year-old master. Footage from classic films and snippets of imperialist atrocities – all rendered in a style suggesting a grubby VHS stuck in an unclean fish tank – play beneath gnomic declarations of despair and lengthy quotes from dead pessimists.

If (perish the thought) the viewer does get distracted then he or she can keep awake by cataloguing the visual and aural quotes. Early on there’s a snippet from a broadcast discussing Scott Walker’s 2006 album The Drift. Films extracted include Freaks, The Rules of the Game, Young Mr Lincoln, Salo and Johnny Guitar. That last film (once mischievously described by Michael Winner as the worst he’d ever seen) was among those reclaimed by Godard in his years as a young critic and its inclusion presses home – despite the unforgiving tone – how ancient many of the arguments and references seem. Any Americans watching The Image Book will, for instance, be made painfully aware that it’s time they got out of Vietnam.

It’s easy to be cynical (as you have just seen). But this reminder that Godard is still at it and that he still cares stirs the spirits. Stay focussed and discrete arguments concerning the west’s distorted view of the Arab world and the violence inherent in artistic representation can be discerned.

There seems, however, no sane way of stringing these points together into a coherent sequence. It may be frightfully bourgeois of me, but, as the typefaces yelled and the pessimism grew, I yearned to be watching one of Adam Curtis’s more disciplined documentaries instead. Mind you, we wouldn’t have got Curtis without Godard.

The independent Chinese film-maker Jia Zhang-ke again demonstrates his commitment to state-of-the-nation film-maker with a fascinating, leisurely meander through the recent transformative years for his nation’s economy. He also confirms an odd (possibly unique among contemporary film-makers) passion for the songs of Village People. Mountains May Depart, which played here in 2015, began with a celebration to The Pet Shop Boys’ version of Go West. Ash is the Purest White returns repeatedly to YMCA. Well, those sailor suits don’t pay for themselves.

The excellent Zhao Tao, the director’s partner and frequent collaborator, plays a resilient young woman called Qiao, who begins the film as girlfriend to Bin (Liao Fan), a hoodlum in a depressed mining town. During an attempted assassination attempt on Bin – staged thrillingly as car chase and martial arts punch-up - she pulls a gun and stands defiant. She ends up serving five years in prison. Her boyfriend gets just one. He would have been inside longer if she’d revealed that it was his gun, but, unmoved by her loyalty and now respectable, Bin shuns her advances when he gets out.

Peppered with the director’s trademark humour, the picture emerges as a portrait of a changing economy – weekend golfers replacing bling gangsters – and a convincing, nuanced character study. Qiao is a woman of quiet integrity, but she is not above improvising cons when the situation requires. At a posh restaurant, she approaches random rich blokes and says: “I’m her sister; she’s had a miscarriage.” She knows she’ll eventually catch a guilty husband with a girlfriend on the side.

The picture could use a little tightening. Pawel Pawlikowski’s Cold War, also in competition, told a story across an even longer time frame, but was a whole hour shorter. Zhao Tao still holds the attention throughout and the analysis of current Chinese discontents remains gripping. We look forward to hearing In the Navy in Jia’s next state-of-the nation address.

Orwell: A Man of Our Time – A sloppy, disorganised biography
9