Despite a dispute with Netflix and films not being ready in time, the competition is one of the funkiest, least creaky in years 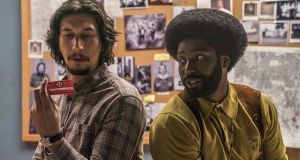 Nobody much questions that the Cannes film festival is at some sort of crossroads. The debate hangs around the extent to which the management intended it this way. By now, everyone knows that a dispute with Netflix – can you say “fault on both sides”? – has deprived Cannes 2018 of several significant titles.

Two in particular. Alfonso Cuarón’s Roma will not be in the main race. Netflix refused to compromise and – though it wouldn’t affect its release strategy – allow the restored version of Orson Welles’s The Other Side of the Wind to screen out of competition. The pressure to premiere prestige English-language titles at Venice or Toronto, when the Oscar race clears its throat, has also drawn away a few contenders. But, more than anything else, it is Harold Macmillan’s “events, dear boy” that has altered the programme’s tone. In short, a bunch of stuff wasn’t ready.

Whatever the reason, we have ended up with one of the funkiest, least creaky competitions in years. Some veterans do make a welcome return. Now 87, Jean-Luc Godard, who helped shut the festival down 50 years ago, will compete for the Palme d’Or with The Image Book (though the great man himself will almost certainly be elsewhere).

Spike Lee, who many think was robbed of the top prize when Do the Right Thing played here in 1989, will be back with his inelegantly titled dark comedy BlacKkKlansman.

When the programme was announced last month, it looked as if this would be the first year without a previous Palme d’Or winner, but Nuri Bilge Ceylan’s The Wild Pear Tree was subsequently slotted in. The Turkish director, who won for Winter Sleep in 2014, is not known for his economy of expression and, sure enough, the new picture, concerning a young writer returning home, clocks in at a bottom-busting 188 minutes.

The festival begins with a screening of Asghar Farhadi’s first film in a language other than his native Farsi. Starring Javier Bardem and Penélope Cruz, Everybody Knows sounds like another taut dissection of marriage from the double Oscar-winner behind A Separation and The Salesman.

There is a potential news story in the inclusion of new films by Jafar Panahi and Kirill Serebrennikov. Panahi, competing with Three Faces, was, until recently, retained under house arrest by the Iranian regime and may still not be permitted to travel. Serebrennikov, director of the brilliant The Student, arrives with Summer, a tempting drama on the Leningrad rock scene of the 1980s. A brave dissenting voice in Russia, Serebrennikov is currently detained on embezzlement charges that supporters believe to be trumped up.

All serious film fans will be excited about the inclusion of Pawel Pawlikowski’s Cold War. The Polish director, who won an Oscar for Ida, tells a tale spanning four countries in the 1950s (yet somehow clocks in at just 85 minutes).

Fans of David Robert Mitchell’s brilliant horror film It Follows – which wowed Critics Week here in 2014 – will be thrilled to hear about his noir epic Under the Silver Lake. Andrew Garfield and Riley Keough star in an apparently twisty LA tale that, if the trailer is to be believed, touches on Chandler on the way to Inherent Vice. There will also be new films from such respected directors as Jia Zhangke, Lee Chang-dong and Matteo Garrone.

For all the zippiness of the competition, there remains a dearth of woman directors. Three make the competition: the Lebanese Nadine Labaki with Capernaum; the French Eva Husson with Girls of the Sun; and the Italian Alice Rohrwacher with Happy as Lazzaro. Aware that Jane Campion remains the only woman to have won a Palme d’Or for directing, jury president Cate Blanchett – whose starry team includes such of-the-moment voices as Ava DuVernay and Kristen Stewart – will be watching those films with particularly close attention. Neil Young, a respected critic and programmer who compiles reliable odds, has Rohrwacher as the ante-post favourite at 9/2.

Many felt that, in the wake of #metoo, the festival did little for its reputation by welcoming back Lars Von Trier. Declared “persona non grata” after an ill-judged gag about Hitler in 2011, the Dane is edged onto the red carpet with The House that Jack Built. There has been less kerfuffle about the Nazi stuff and more about the apparent accusations of sexually impropriety levelled against the director by Björk “That was not the case. But that we were definitely not friends,” Von Trier has said of their experiences working on Palme d’Or-winner Dancer in the Dark. It doesn’t help that his new film stars Matt Dillon as a man who murders women. It helps a little that it also stars Uma Thurman, who has been frank about her own mistreatment.

As every Cannes regular will delight in telling you, there is, perhaps, too much focus on the main competition. Elsewhere in the official selection, we find Christopher Nolan introducing a new (but “unrestored”) 70mm print of 2001: A Space Odyssey to celebrate the 50th anniversary of Stanley Kubrick’s epic. Northern Irish film boffin Mark Cousins offers Wellesians some comfort with his new documentary The Eyes of Orson Welles, drawing on “unprecedented and exclusive access” to the director’s drawings and paintings.

The funkier sidebar Director’s Fortnight will spring surprises we can’t predict (that’s the thing about surprises) but also treads potentially familiar territory with Climax, the latest “drug-fuelled descent into hell” from Gaspar Noé. You never can tell. Maybe the director of Enter the Void and Irreversible really has broken out of his discomfort zone.

And then there’s Star Wars. For all the wealth of cinema on display, the world’s media will be most concerned with the premiere of Solo: A Star Wars Story. Having unveiled no big Hollywood releases last year, the Cannes team is certainly delighted to have this big beast on board. But what’s in it for Star Wars? Glamour. Suavity. And something that you can’t buy on Hollywood and Highland: class, class, class.

Who’d be anywhere else?

The Image Book,  Jan-Luc Godard: His last, Goodbye to Language, was his best in a decade. Still made no sense, mind.

The House that Jack Built,  Lars Von Trier: There are all kinds of reasons to be wary. But Von Trier is a draw.

The Man Who Killed Don Quixote, Terry Gilliam:  Is it finally here? Maybe not. The lawyers are still squabbling.