Does Hollywood have a problem with racism? An array of Tinesltown’s finest think so 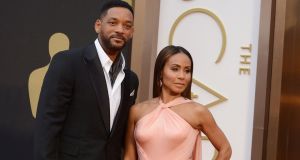 Will Smith, left, and Jada Pinkett Smith will join others in protest against two straight years of all-white acting nominees. Photograph Jordan Strauss/Invision/AP

Will Smith won’t be going to this year’s Academy Awards. Neither will Michael Moore or Spike Lee. Chris Rock is under pressure to step down as host. And the hashtag #OscarsSoWhite is trending all across social media.

Irish eyes may have been focused on local successes for Room and Brooklyn when the nominees for this year’s awards were announced nine days ago, but the biggest story is anger in the US, where George Clooney has said the film industry is “moving in the wrong direction” because of its lack of diversity. Dustin Hoffman told the BBC he believed America suffered from “subliminal racism”.

How bad is it? For the second year in a row all 20 nominees in the acting categories are white. Well-received films with strong black performances such as Straight Outta Compton, Creed and Beasts of No Nation have been pretty much ignored.

The president of the Academy of Motion Picture Arts and Sciences, which organises the Oscars, has said she is “heartbroken” and will be taking “dramatic steps” to adjust the balance of the Academy’s membership to include more black and ethnic minority film-makers.

The Los Angeles Times reported in 2012 that the 6,300 members were 94 per cent white and 77 per cent male. Black people made up only 2 per cent, with the proportion of Latinos even lower. (Some 36.3 per cent of the US population is non-white).

The academy is reportedly considering expanding the four acting categories which have caused most controversy from five to 10 nominees apiece, and removing voting rights from older, less active members who do not cast regular ballots. Those changes will be considered at a meeting of the organisation’s 51-strong governing board next Tuesday.

But Spike Lee, who was due to receive an honorary Oscar for lifetime achievement at this year’s ceremony, says Hollywood’s problems run much deeper than the membership of the academy. “It has to go back to the gatekeepers,” he says. “We’re not in the room. The executives, when they have these green-light meetings quarterly where they look at the scripts, they decide who’s in it and they decide what we’re making and what we’re not making.”

There’s no doubt the industry has a problem. It’s not just the absence of non-white faces behind and in front of the camera. It’s also the types of non-white stories which do get made and get recognised.

Lee’s honorary Oscar was partly intended to mark the 25th anniversary of Do the Right Thing, his groundbreaking, highly political study of racial tensions. In 1989, Lee’s film lost out to a much more benign view of black-white relations in Driving Miss Daisy.

Fast and Furious star Tyrese Gibson summed up the anger.

“If all of the voting academy members are 80 years old and can only recognise gifts and talents that are associated to you being an actor in a slave movie, or as a nanny, get them out of there. It’s time.”

Dancing with the Stars: Shock exit for teary-eyed Sinéad O’Carroll
6