Ang Lee’s extremely odd film is certainly audacious, but it falls flat, both as a technical experiment and as a critique of US militarism 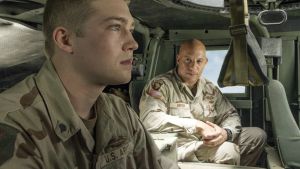 Every now and then we are obliged to discuss a film in terms of a prominent technical innovation. Few reviews of The Jazz Singer got through their first paragraphs without mentioning sound. Critics exhausted the thesaurus in their efforts to communicate the digital otherness of Avatar.

The oddest thing about this odd, odd film is that an innovation that next to no viewers will experience has dictated its aesthetic to a suffocating degree. Ang Lee’s latest (and weakest) film is shot in a super 3D format whose 120 frames-per-second resolution allegedly makes The Hobbit – at a puny 48 fps – look like the work of a drunk monkey with a 2007 camera phone.

This is worth mentioning because Lee has composed every shot with the new technology in mind. Endless, vast close-ups invite contemplation of pores we can’t actually see. Complex tracking shots include upstage action that may well be diverting for viewers in one of the few US screens equipped to screen it. The rest of us are stuck with just half of an odd, odd experiment.

Did I mention the film was odd? It is odd. But it’s not odd like Attack of the 500-Foot Lobster. It’s odd in fashions you wouldn’t expect from one of our era’s cleverest and most versatile filmmakers. It is oddly dull.

The pitch may have been something like “Catch 22 meets Flags of our Fathers”. Adapted from a much-admired novel by Ben Fountain, Billy Lynn’s Long Halftime Walk concerns a squad of US soldiers, recently returned from a heroic adventure in Iraq, dispatched on a victory tour of the home nation. The main body of the film finds them being presented as patriotic specimens at a Dallas Cowboys football game.

We view the action through the eyes of the titular Specialist Billy Lynn (a largely inert Joe Alwyn). Before heading off to the football stadium, he returns to his working-class family for an uneasy pre-Thanksgiving dinner. Mom is desperate to maintain good relations. His disabled dad is permanently furious. Billy’s peacenik sister Kathryn (played in a standout turn by Kristen Stewart) urges him to seek an honourable discharge for PTSD. Will he return with his buddies? Will he reject empty patriotism?

There are dilemmas worth chewing over here. Sadly, the film’s terminal lack of irony undermines its dialectic ambitions. Just consider the stonkingly obvious manifestations of “America” that challenge Billy. There’s a Thanksgiving dinner from the greyer corners of Norman Rockwell’s imagination. The boys attend an American football game. A Bible-bashing cheerleader offers herself to the hero. A money-loving mogul (played with no great enthusiasm by Steve Martin) offers to buy their story and make it into a mainstream movie. All that’s missing is a bald eagle campaigning for the NRA.

Weirdly, the picture manages neither to effectively undermine these institutions (they are what they are) nor to guiltily revel in their vulgarity (this devil has the most ho-hum tunes).

The scenes at the ball game are deadened and unemotional. The action takes off only during a flashback to a firefight that ends with Billy engaging in hand-to-hand with a committed enemy. That scene really is good enough to belong in an Ang Lee joint.

Perhaps that’s the point. For Billy and his friends, home life has taken on the quality of an unconvincing waking dream. Only the earlier violence seems real. This makes a kind of sense, but keeping that thought to the front of the brain doesn’t make the film any easier to enjoy. An ending that appears to embrace damp-eyed militarism further undermines any efforts at ideological tension.

Oh well. At least Mr Lee’s got the thing out of his system.