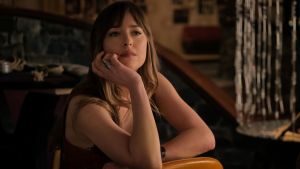 If Drew Goddard is going to make a film that so shamelessly echoes the post-Tarantino follies of the mid-1990s are we allowed to just reprint a review from that same era? The notices for 2 Days in the Valley or Things to do in Denver When You’re Dead sound about right.

It works for the first hour. Nodding as much to Agatha Christie as Uncle Quentin, the picture, set in the late 1960s, properly kicks off with various one-note characters – Jon Hamm’s seedy salesman, Cynthia Erivo’s soul singer, Jeff Bridges’s whiskey priest, others – arriving at a quiet motel near the rougher end of Lake Tahoe. For no good narrative reason, a line passes through the establishment dividing the wings between California and Nevada. A prologue has informed us that the most durable of all MacGuffins – a big bag of money – has been placed beneath the floorboards of one room. We assume it will cause squabbling in a final act.

Bad Times at the El Royale has a fine time laying out endless loose ends. Before too long, we learn that the only employee prowls a secret passage lined with one-way mirrors allowing views of each room. Dakota Johnson turns up with an apparent prisoner. The cast is strong enough to excuse the laboured attempts at heightened dialogue. Bridges does rugged. Johnson does cool. The excellent Erivo, also seen to advantage in the upcoming Widows, confirms her claim as one of the UK’s most promising young actors. (Watch out for a suave cameo by the Quebecois actor and director Xavier Dolan. )

As the film drags on, however, it becomes depressingly clear that Goddard has devised no clever way of tying these strands together. It ends in an exhaustingly boring standoff that takes fetishisation of the 1960s to near-lunatic proportions: Manson, Motown, Nixon, Vietnam. The real Tarantinto will be along to do that next summer with Once Upon a Time in Hollywood. I’d hang on till then if I were you.

Have arts and culture been demoted again?
9