Seth Rogen, Rose Byrne and Zac Efron reprise the adulthood-on-hold set-up of the original, this time with a mild undercurrent of empowerment 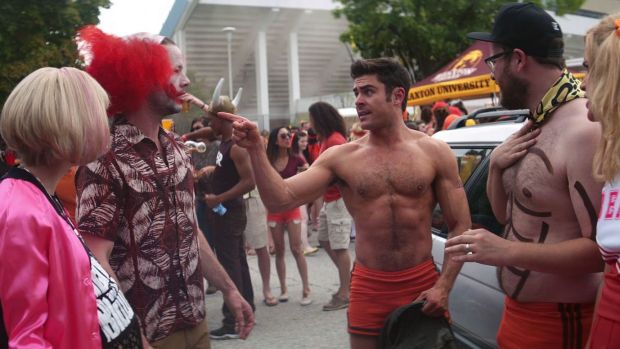 Nice job, Hollywood layabouts. Asked to come up with a sequel to Bad Neighbours – in which Rose Byrne and Seth Rogen lived angrily beside a college fraternity – the five highly paid writers have scribbled one word on the back of an envelope and gone back to sleep with their money.

That word is “sorority”. Yes, this time around, Byrne and Rogen, eager to keep the house tidy for prospective buyers, watch nervously as a bunch of female students move in next door. Those three years studying the three-act structure didn’t go to waste.

Sometimes, life isn’t fair. Bad Neighbours 2 is no masterpiece, but, despite its terminally lazy high concept, it is slightly funnier and bit more sociologically diverting than the first episode. God bless the film-makers; they’ve made a half-hearted effort – better than no effort at all, I suppose – to address the casual rape culture on American campuses.

Chloë Grace Moretz plays a freshman who, in her first days at college, attends a typically revolting party at a frat house. Disgusted at the event’s predatory vibe, aware traditional sororities are forbidden from hosting parties, she and her pals elect to set up their own residential hangout in a nearby suburb. You won’t need to be told who lives on the same block.

Nobody is going to confuse Bad Neighbours 2 with a feminist document in the school of Chantal Akerman. After all, the girls do need Zac Efron – Rogen’s arch-enemy from part one – to help them organise their lives. But the jokes are shared out evenly. The supremely funny Rose Byrne, discussing the franchise recently, argued that women were, unusually for such mainstream comedies, allowed to be irresponsible and were not asked to merely nag from the sidelines.

Sure enough, both she and Moretz get to behave just as idiotically as Rogen and his posse. The notion that the students can only deal with money in terms of buckets – the house costs “five buckets a month” – will ring true with many who have passed through tertiary education.

Like many such beasts, the film has no structure worth acknowledging. The scenario is established and the team then improvise their way through loosely linked set-pieces. All we can reasonably ask is that the hit rate passes above 50 per cent. I scored it in the low sixties. That will do to be going on with.