At Eternity’s Gate: Willem Dafoe captures the anguish and elation of Van Gogh

Review: The film makes a genuine effort to engage with the artist’s mental torments 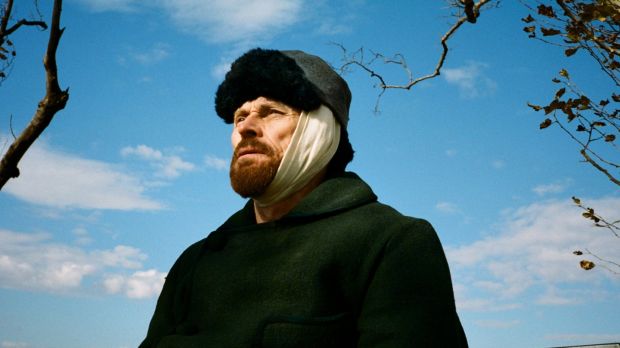 Willem Dafoe as Vincent Van Gogh: the actor so owns At Eternity’s Gate that it’s difficult to imagine it without him. Photograph: Lily Gavin

For more than a few decades – most recently in the beautiful, but pointless Loving Vincent – filmmakers have addressed the Van Gogh aesthetic by finding cinematic correlatives for the pictures. You know the sort of thing. A yellow room. A sky full of blurred stars. A vase of sunflowers.

There is some of that in Julian Schnabel’s effective biopic – the yellow room has rarely been yellower – but there is much more besides. Here is a film that makes a genuine effort to engage with the artist’s mental torments while putting forward fresh (albeit contentious) suggestions about his route to a bloody death. It’s an attractive piece of work. It’s also a thoughtful one.

At Eternity’s Gate, whose title points unmistakably towards last things, is chiefly concerned with Van Gogh’s final months in the south of France. The great man (Willem Dafoe) meets Paul Gauguin (Oscar Isaac) in Paris. They argue about the current trends in painting. Van Gogh chats further with his brother Theo (Rupert Friend) and sets off on foot for Arles. There he meets characters who will appear in famous paintings, struggles with his own sanity and scares a few of the uncomprehending bourgeoisie.

Much of this will be familiar from Kirk Douglas’s antics in Vincente Minnelli’s Lust for Life. Schnabel’s approach is, however, more focused and less inclined to manufacture artificial narrative hairpins.

Drawn from Van Gogh’s famous letters, the dialogue is ornate and poetic throughout. Benoît Delhomme’s camera riffs on the painter’s colours, but it also discovers a rugged ugliness in the roots and soil.

Dafoe, a recent Oscar nominee, so owns At Eternity’s Gate that it’s hard to imagine it existing without him. He has long been master of the conflicted, bitter messiah and, though there is something reductive about applying that approach to geniuses, he is so connected to the psychology that the interpretation somehow remains sincere. Van Gogh is clearly what we would now call “bipolar”, and the actor conveys not only the anguish that holds him back but also the elation that accompanies moments of creative epiphany.

It hardly matters that Dafoe, who learnt to paint for the role, is almost twice Van Gogh’s age at the time of his death. If anything, Willem is suspiciously taut and muscular for an impoverished, mentally-ill painter at the turn of the last century.

Exterior accuracy is not the point here. Schnabel, himself a painter, is going for an internal portrait, and At Eternity’s Gate comes as close to that as we could have hoped.