The film-maker on Trump’s charm, new film Fahrenheit 11/9, and getting the vote out 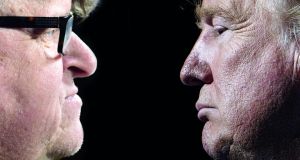 Resistance is not futile: Michael Moore takes on Donald Trump in Fahrenheit 11/9. Montage: The Irish Times

It’s the middle of the London Film Festival and Michael Moore is a little dampened. I mean that literally. It’s been lashing for a few days and he’s had just about enough. That surprises me. The stalwart documentarian was famously raised in the blue-collar city of Flint, Michigan. His breakthrough feature, Roger & Me, detailed the decline of the locale’s car industry. In his latest picture, the angry, caustically funny Fahrenheit 11/9, he returns to Flint and discusses how bandit capitalism poisoned the water supply. They get all kinds of weather up there.

“Yeah. But I’d rather see the snow than just be wet,” he says.

He sounds tired. Who wouldn’t be? Named for the day that Donald Trump’s election was confirmed, Fahrenheit 11/9 offers a survey of a country caught up in furious dispute with itself. Moore isn’t proud of himself, but he saw Trumpageddon from a long way off. He always thought he had a chance of the nomination. When I last talked to Moore in the summer of 2016, he warned that Trump really could win the “rust belt” states in the upcoming election. I don’t imagine he’s happy to be proved right.

I think most people now realise the American dream is just that – it’s never going to be a reality for them. Both parties have let them down

“I live in the midwest,” he says. “So I was listening to people and paying attention. I knew that people were going to vote for him, not so much because they liked him but because they saw him as a Molotov cocktail that could cause the most damage.”

Moore is happy to point out that a large part of the US is ignored by coastal elites. But that has always happened. They went through worse in the 1930s, but, rather than electing some right-wing dunderhead, they embraced something close to democratic socialism with the New Deal.

“I think most people now realise the American dream is just that – it’s never going to be a reality for them,” Moore ventures. “Both parties have let them down and they saw that the elites of both parties hated Trump. And that made them like Trump.”

Fahrenheit 11/9 begins and ends with a study of the Trump ascendancy. In between, Moore ponders recent phenomena such as the Parkland shooting, the West Virginia teachers’ strike and the apparent rise of a new left. He also finds time to address his own early encounters with Trump. Of course, he ended up on a TV broadcast with the future president. The most unlikely people have admitted that Trump can be charming in person.

“Absolutely, yes,” Moore says. “I didn’t tell the whole story in the movie. I had to go back into the green room and tell him that it was going to be okay. I didn’t realise until much later that I was being played.”

He had to tell him everything was “going to be okay”? He had to comfort the great Emperor of Braggadocio?

“He gets you feeling sorry for him,” he says. “He always feels like the outsider. The rich elites never did accept him into their club in New York. He was the trailer trash of millionaires. He doesn’t want them to like him. He genuinely doesn’t care about them.”

That’s interesting. So, in that sense, maybe his voters are right about him. Despite being born into wealth, Trump might just be an anti-establishment figure.

“Let me think about that one,” Moore says sombrely. “I’m not sure how to answer that.”

Nobody could accuse Moore of being born anywhere near a silver spoon. His father was an assembly-line worker and his mother was a secretary. He has gone on to move in the most exalted circles. Bowling for Columbine won the Oscar for best documentary in 2003. Just a year later, Fahrenheit 9/11, his dissection of the second Bush presidency, became the first documentary in nearly 50 years to take the Palme d’Or at Cannes. Yet he has retained that working-class look throughout: baseball cap, baggy shirt, shaggy hair. I wonder if his politics have changed. Has he, with age, drifted even a tad to the right?

I don’t think so. But people do.

All our energy has to be directed to getting our side out. If somebody is still for Trump after all they’ve seen in the past two years, then they’re lost. You have to let them go

“Oh no. I think the opposite. I am more radical,” he says. “When people say: ‘What can we do to convince Trump voters?’ I say: ‘Don’t waste your time.’ All our energy has to be directed to getting our side out. If somebody is still for Trump after all they’ve seen in the past two years, then they’re lost. You have to let them go. You have to spend your time convincing those on our side who may not be planning to vote.”

With that drive, he could have made an effective politician. Indeed, Moore started out along that road. Aged 18, when he secured a place on his local school board, he became the youngest person to hold elected office in the US. He did a year in college. He then drifted towards journalism on the radical newspaper Mother Jones. He must occasionally wonder what might have happened if he had pursued a life on the hustings.

“Yeah, I ran for office when I was 18 and got elected,” he says. “I served for four years. I think everyone should run for office. But I am more effective doing what I do.”

Are we any closer to American socialism? Have the films affected how people think or vote?

“I feel that way about all my films,” he says. “Each of them moved the ball down the field. Not as far as I wanted it to go. We don’t have the universal healthcare we need. But when I made a film called Capitalism: A Love Story, you couldn’t even use the S-word. Now it’s used all the time. I wouldn’t do this if I didn’t think it would have an impact.”

The films had, at least for a while, an impact on the industry too. Fahrenheit 9/11 became the highest-grossing documentary of all time and the highest-grossing winner of the Palme d’Or (yes, it made more than Pulp Fiction). For a while, non-fiction films earned serious coin. That doc boom hasn’t lasted. But he made a difference.

“I feel really good about it,” he says. “I didn’t start out that way. I wanted to make a documentary that people would enjoy seeing in the movie theatre – not medicine they felt forced to take.”

He goes on to ponder the absence of documentaries on urgent current events and then veers towards a different genre.

“There’s a film in the festival called Rosie. Have you seen that?”

Paddy Breathnach and Roddy Doyle’s drama about homelessness in Dublin? I have indeed. I pass on my hearty recommendation and Moore promises that he will go and see it that evening. He’s never been shy about acknowledging his Irishness. I mean, just look at the man. Where else could the ancestors have come from?

“Well, look. As Irish people, we’ve been through a fairly dark time,” he chortles. “Along the way, we developed a decent sense of humour. And we were prohibited by the religion we were raised in from just ending it all. We have to go to the end of our natural lives.”

He’s perked up now. The damp has been shaken from his bones.

“The only way to make it there is with a dark sense of humour – and a pint of Guinness whenever possible.”

MICHAEL MOORE ON THE FIGHT AGAINST TRUMP

The Democrats
“I wouldn’t trust them to do anything of any significance that’s going to make anything better. I mean the apparatus, not the ordinary people.”

Will the young leftists resist a drift to the right?
“Yes, I do believe that. Because the forces ranged against them are so great. The world they’re being handed is not a very good world, and they know they are going to have to fight.”

Who is the real enemy?
“Trump is not the enemy. We are the enemy to ourselves. Our inability to understand that the majority of the American people agree with us is embarrassing.”

Should the Democrats stick to the centre?
“Going to the left is where the victory is. Being mediocre, the same old, same old: that’s how we lose.”