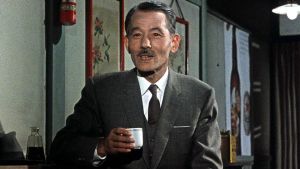 Greying widower Shuhei Hirayama (Chishu Ryu) divides his ritualistic life between drinking sessions with the same old friends and home, where he is tended to by daughter Michiko (Shima Iwashita). A brush with the bitter spinster daughter of his former teacher reminds Hirayama of what might happen if he keeps the girl at home. But can he manage without her?

Yasujiro Ozu didn’t know that this unbearably poignant 1962 drama would be his final film. But An Autumn Afternoon is as fitting a swansong as ever there was. A sense of melancholy and forfeit hangs around the picture: “Isn’t life disappointing?” notes a young woman; “Yes, it is,” replies her sister-in-law. Regrets abound: Hirayama’s old teacher has fallen on hard times; Michiko will not, we are led to believe, end up with the man she loves; every evening ends with a drunken stupor.

Hirayama’s three children are not as self-involved and pre-occupied as the ingrates depicted in Tokyo Story. But the final line is a dark Beckettian snap: “Alone, eh?”

The director’s trademark uses for low-angled camerawork, tight framing and punctuating pillow shots have seldom felt so straightening, so ceremonial. The famous wedding ellipses makes for the saddest happy occasion in film.