After Love: compelling and complex tale of betrayal 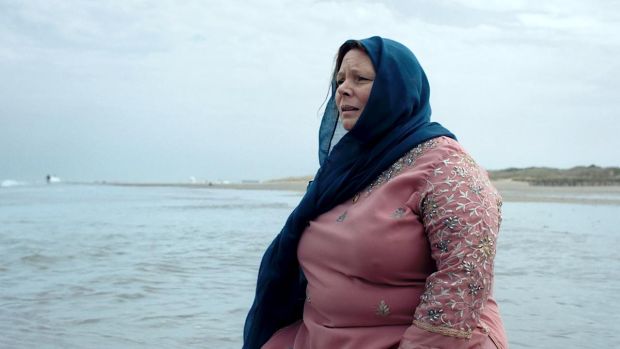 There are some familiar shades in this compelling feature debut from Aleem Khan. A recently widowed woman enters into an unlikely relationship with her late husband’s hitherto unrevealed second wife and learns some uncomfortable lessons.

It’s not just the largely Francophone setting that nudges one towards the work of the Dardenne brothers. After Love also manages the same blend of relaxed humanism and melodramatic twists. The acting is as strong as we expect from those Belgian filmmakers. The characters feel as true and fleshy.

There are singular touches here as well – occasional expressionist nods that tease out the characters’ inner torments. When Mary (Joanna Scanlan) looks back at the receding white cliffs of Dover, a minor landslide, real or imagined, reminds us and her that her world is falling apart. There is daring in with the restraint.

Listed in the Critics’ Week selection for the Cannes Festival that didn’t happen last year, Khan’s film has been categorised as an emanation of the British Doosra Movement (cricket fans will enjoy the reference), an attempt to offer “new images of the British Asian experience”. One may or may not see it as ironic that After Love is largely concerned with characters who are not of Asian heritage.

The peerless Joanna Scanlan plays the cautious, tolerant Mary, an Islamic convert married to the briefly glimpsed Ahmed (Nasser Memarzia). We see them return home from an evening out. Mary places leftovers in the fridge. Before we get to know him, her husband is dead.

When Mary is tidying up Ahmed’s affairs, she scrolls through his phone and reads apparently romantic messages to another woman. She finds a French ID card for someone called Geneviève (Natalie Richard), notes down the woman’s address in Northern France – Ahmed was a ship’s captain – and sets out to confront her with the ugly truth.

Geneviève finds this veiled woman in a salwar kameez waiting for her and, pointing up low-level racist attitudes that have survived her relationship with a Muslim man, immediately assumes Mary must be the cleaning lady. A resonantly uncomfortable moment.

Here we encounter one of those plot twists (not uncommon in Dardenne brothers films) that asks the audience to take a deep breath and just go along for the ride. Intrigued and horrified, Mary accepts the job and takes to poking about in her rival’s drawers. It is an absurd notion. But the conceit does allow her almost unfettered access to her late husband’s second home.

Khan’s own script spills out revelation after revelation. The other couple have a teenage son who turns out to be gay. It transpires that Geneviève actually knew about Mary’s existence. One of the smallest surprises is the most powerful. Mary’s eyes open wide as she sees a photograph of Ahmed drinking a beer. No words are said, but we get a clear sense that feels betrayed on at least three levels.

There is a great deal to digest here. The film spins out all kinds of questions about the confusions and misunderstandings that can exist between apparently well-suited people. Impressive amounts of backstory – notably, what became of Mary’s own, never-mentioned relatives – are left for the viewers to deduce on their own.

None of this would work if the lead actors were not so firmly connected to their complex roles. Richard convinces as the less uneasy of the two, a woman who has already accommodated a certain amount of creative deceit. Best known for her brilliant comic work in Getting On and The Thick of It, Scanlan is quietly transcendent, conveying a sense that every step is now made on newly uncertain surfaces. All her assumptions about the world are suddenly insecure. That is the modern condition.

In cinemas from June 10th