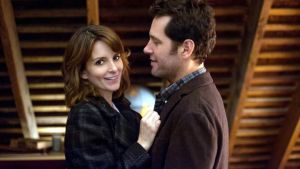 Have you ever wondered how the admission procedure functions in Ivy League universities? No, me neither. That is, however, one of many unasked questions addressed in this largely pointless, meandering comedy from the erratic Paul Weitz.

Based on some novel or other, the film never quite decides what it wants to be. At times, it reaches for the sub-indie wryness of an Alexander Payne road movie. Elsewhere, it aspires to be a campus farce in the style of David Lodge’s amusing books. At no point, does the story settle into any sort of rhythm. It’s unusual to encounter a film that manages simultaneously to be so odd and so deathly uninteresting.

Tina Fey (neurotic, prim) plays a senior admissions official at Princeton University. In the first few days of the new season, she visits an alternative school run by the mildly anti-establishment Paul Rudd (as pleasantly vague as ever).

In the first of too many random revelations, he tells her that one of his favourite students – a lovable eccentric with an unstoppable intellect – might be the son she put up for adoption in college. Because this is a film and we need absurd dilemmas, the young man then decides to apply for a certain university in New Jersey. Fey is conflicted.

There are some nice exchanges between the two leads. Declan Quinn’s camera enjoys the lushness of the historic campus town. But the film is constantly stubbing its toe on the jutting edge of its own jarring compromises. About halfway through, somebody is obliged to point out that attending Princeton is not the only way forward for a bright young fellow. Unfortunately, having negotiated access to the college buildings and hung the entire film around an application to the place, the film-makers spend most their time arguing precisely the opposite.

One more thing has to be said. After turns from Barbra Streisand in Meet the Fockers, Annette Bening in Ruby Sparks and, now, Lily Tomlin in Admission, we hereby declare a moratorium on distinguished actors playing aging hippie moms whose organic eccentricities embarrass their more uptight offspring. That’s no longer cool, man.

The Chicks: ‘We were accepted because we made them a lot of money, but they didn’t like us’
5

Marian Keyes: ‘I thought when I stopped drinking my life was over. It was just beginning’
6