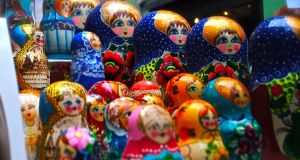 David Attenborough doesn’t like rats. It’s true. You’d think a fella who makes a living from animal-kingdom voyeurism would be open-minded when it comes to all things creepy, crawly, wriggly, runny and ratty. He’s only human. Bear Grylls will drink juice squeezed from elephant shite, but he’ll run a mile and bury himself in a septic tank when faced with a brussel sprout. All of us have limits (except Chuck Norris, whom 2Unlimited penned the song about) and it’s healthy to know where yours lie so you can avoid them
like bachelors dodging Sinead O’Connor at a speed dating night in Café en Seine.

Amateur Drama Festivals are my brussel sprout. My amdramophobia became acute while attending a Drama Festival in Co Wicklow. It was a competition where amateur dramatic groups pitted their thespian skills against one other in marathon evenings of endurance theatre. There were some moments in the theatre where the possibility of a glimmer of entertainment almost revealed itself to me. A highlight of the first play (there were three!) being when one actor ate a bit of raw carrot that then began to repeat on her to such an extent that both talking and
controlling her false teeth became a gargantuan struggle; I don’t think it was scripted.

The next moment of excitement came when a lady returning to
her seat after the second interval (two intervals and three plays, it
was a feckin’ long night) stumbled on her scarf and managed to simultaneously trip and choke herself. Genius! Definitely my pick for the Fred Lee award. I couldn’t help it; I get as vicious as a fox when trapped in a tight corner.

I was finally pushed over the edge by the longest raffle in the history of humanity. What made this raffle particularly excruciating was that the master of ceremonies had the most wonderfully plummy diction, meaning that each of the 72 tickets called out took five times longer to process than they should have. I hadn’t had this much excitement since the combination play in the final rubbers of the great bridge symposium of ’83.

There was no escape. I was hemmed in on all sides by excited Hermes scarved ladies, rifling through their wads of tickets in the hopes of bagging the Yardley Pink Lace gift-set. They would have savaged me if I distracted them. Interrupting a perfume gift-box- coveting coven of auld wans during a raffle or card of bingo is the equivalent of dipping your genitals into the feeding bowl of a cage- fighting rottweiler who’s been given his first trough of Chum after an enforced lentil diet of two weeks. Something will be snapped off you.

I’m willing to accept that my experience of events is perverse and jaundiced, the theatre was sold out and all the plays were received with rapturous applause. It’s like serving up Findus lasagna for starter and main – horses for courses.


HIGH SEASON
The good news for amdramophiles is that it's high season. This
weekend sees drama festivals in Roscommon, New Ross, West Waterford, Castleblaney,
Claremorris, Mountmellick, Kildare, Kerry and a clatter more parish halls all round the country; just go stick a pin in the map. It’s an epidemic! If I absolutely had to choose, it’d be the West Cork Drama Festival in Rossmore. Some lovely scenery down that end of the country.

In a prelim for Paddy’s, there’s some Irish and international flag- waving going on around the country this weekend. The People’s Republic has an impressive French Film Festival all weekend (my pick of the week – corkfrenchfilmfestival.com), Waterford will be raising the flag on it’s Tricolour Celebrations with marching bands and historical talks, and the Dublin Festival of Russian Culture finishes off this troika kicking off on Saturday.

I’m off to see if RTÉ need a correspondent to cover the All Ireland Drama Festival in Athlone this May.