Enter the Grouch: a world inspired by Sesame Street

Oscar the Grouch was devised as a means of teaching a young audience about otherness. Artist Sam Keogh takes that concept and runs with it 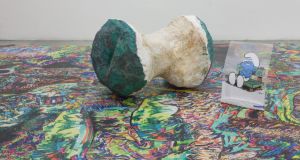 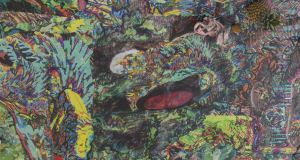 In Sam Keogh’s MOP, the floor you are standing on is imprinted with drawings of Oscar 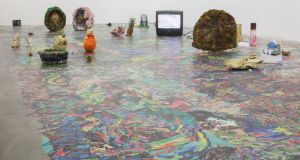 Most artists, you would think, would take it pretty badly if you told them their work was rubbish. Sam Keogh, though, might take it as a compliment, at least if you were talking about MOP, his current show at the Kerlin Gallery, which really is rubbish.

He has transformed the gallery’s normally cool, clean, minimal white space into a labyrinthine rubbish tip. The floor is a kaleidoscopic, unstable mass of ragged pattern, dotted with all manner of images and objects, many of them messy, some tiny, some bigger, some distinctly fragile looking. You have to tread carefully, and even then it’s tricky.

MOP is an environment, and its guiding spirit is a fictional character, namely Oscar the Grouch from Sesame Street. Aficionados of the programme may recall Oscar as the churlish, misanthropic character who lives in a rubbish bin, hoards trash and doesn’t have a good word to say about anyone or anything. In the programme’s feel-good aspirational world, he stands resolutely apart. As Keogh notes, his bristling negativity doesn’t stem from any particular dissatisfaction. It’s just his natural state.

Oscar was devised as a means of teaching a preschool audience that they were going to have to cope with otherness in many forms. This means, for example, dealing with people whose values are definitively, irreconcilably different to their own.

Keogh has taken this idea and run with it. At the heart of his labyrinth is a video performance in which he enunciates everything characteristic of Oscar. Appropriately, he does it as a rant, haltingly, angrily and almost incoherently.

Doodles of Oscar
The floor you are standing on as you look at the video is covered with a vast sheet of vinyl, imprinted with greatly enlarged, fuzzy, doodle-like drawings of Oscar in coloured marker.

Keogh set about gathering and making a collection of images and objects that evoke Oscar and Oscarness. It gets appropriately messy. Banana skins and other rotten fruit, in sculptural form, litter the vinyl, together will all manner of broken and ruined things. The gallery is transformed into a seething mass of stuff. It’s not pretty, yet it retains a curious appeal.

You come upon many images amid the debris. A character who lives in a dustbin clearly invites an association with Samuel Beckett, for example, and Endgame is there. The Greek philosopher Diogenes the Cynic, who lived in a ceramic jar and was famously tetchy, is a clear precursor of Oscar. The detailed exploration of human folly in the paintings of Hieronymus Bosch makes them a good point of reference. Elvis Presley in his latter, sad, bloated years makes an appearance, as do some punk musicians, including Johnny Rotten.

“I wanted,” Keogh says, “to make the definition of Oscar more fuzzy. He’s a character who doesn’t have an ideal centre. He’s a mess. He’s pissed off all the time, he likes everything that the rest of us get rid of, and he wallows in rubbish. Yet despite his permanently angry attitude, he somehow retains a kind of cartoonish charm.”

MOP is a tremendously effective installation, thoughtful and provocative, with a lot more going for it than cartoonish charm.

Keogh is not that long out of the National College of Art and Design. His father is a ceramicist, and Sam grew up with potter’s clay readily to hand. That undoubtedly contributed to his fascination with amorphous, malleable materials capable of transformation – although, he remarks, he never took to the potter’s wheel. His liking for the Japanese wabi-sabi aesthetic also stems from ceramics. The wabi-sabi sense of an always imperfect, transient beauty has clear links with Keogh’s interest in Oscar.

Graduation show
Initially he studied animation at Dún Laoghaire Institute of Art, Design and Technology before enrolling at NCAD, where, surprisingly, he was in the painting department rather than sculpture, because he felt the ethos there was more suited to his line of inquiry. He graduated in 2009 with a degree show that attracted much favourable comment.

His show included deft sculptural mock-ups of massive stones and minerals, delivered with great flair but not disguising their artifice. As he sees it, he was “re-reading minimalism”, questioning its claims to be abstract and autonomous, grounding it in the very stuff of the world: dirt and rock. He was also interested in how that stuff can “become an art object in the context of a gallery”, something he sees as being “contingent on all sorts of external things”.

These concerns have been manifested in various ways in his projects during the last few years, culminating in his huge and hugely ambitious installation, Terrestris, in the Project Arts Centre last year. A mountainous form dominated the centre of the centre’s darkened, Black Box space, surrounded by chunks of minerals “mined” from its interior.

The Kerlin will feature him at this year’s Frieze Art Fair. He’s currently working towards an MFA at Goldsmiths College in London, an environment that he finds challenging and stimulating. “It made me realise the reasons why some of my earlier work was successful in an easy way.”

As a piece of self-judgment, that’s a little harsh.

MOP, a sculptural installation by Sam Keogh is at Kerlin Gallery, Dublin until November 9. 01-6709093, kerlin.ie

Kevin Bacon: ‘I was incredibly cocky and unwilling to take any advice’
10