Electric Picnic: 10 things to do at the festival on Saturday

There’s music, including N.E.R.D, but don’t forget the Lake, Hazel Wood and Mindfield 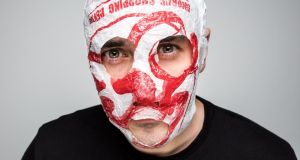 Blindboy Boatclub: Ireland’s favourite podcaster is on the Ah, Hear! stage at 3.45pm on Saturday

Other Voices, 7pm
If you’re looking for a new band name to write all over your metaphorical schoolbag, try Whenyoung. The Limerick trio, now based in London, make the kind of indie music that’s both a throwback to the glory days – think lots of jangly guitars, sharp new-wave riffs, bouncy bass lines and killer choruses – and thoroughly modern. Fronted by the magnetic Aoife Power, they’re a band who put thought into their visual aesthetic without compromising on the music, as proven by the brilliant glut of EPs they’ve already released so far (not to mention a wonderfully rousing version of The Cranberries’ Dreams that they occasionally drop into their set list). One of the brightest Irish prospects to emerge in years. If their excellent new single, Heaven on Earth, doesn’t sell you on them, nothing will.

Cosby Stage, 11pm
With her debut album, Lost & Found, released this June, touching on topics of racism, sexism, capitalism, greed, young love, toxic masculinity and gun crime in the UK, Jorja Smith is both beyond her years and very much of her time. Just 21, the R&B singer has collaborated with Drake, Stormzy and Kali Uchis, and earlier this year she picked up the Critics’ Choice Brit award, beating Mabel and Stefflon Don. Including elements of spoken word, her combination of social activism and R&B music isn’t a far cry from that of Dan le Sac and Scroobius Pip – but with her smooth voice running through beautiful songs such as Goodbye, she proves herself a capable and dynamic songwriter. Thought-provoking and whip-smart, Smith is a star on the rise. Catch her now, before all her shows sell out.

Main Stage, 10.30pm
Pharrell Williams is one of the architects of modern pop, combining a magpie aesthetic with an innate inventiveness and managing to patch together the past of soul and disco with a freewheeling futurism full of skittering beats and beefy hip-hop licks. His passion project N.E.R.D may be most famous for their early-noughties filthy dance-floor fillers, like Lapdance and She Wants to Move, but last year’s album No One Ever Really Dies was a less straightforward, more discordant, arresting piece of work. How this discomforting disorder will play live in a festival setting will be intriguing, but no doubt Pharrell will have a few tricks up his sleeve. And with his collaborator Kendrick Lamar also on the festival bill, there may even be a spot for him on the stage.

The Lake
If you feel manky, don’t like queueing for showers, and could do with some not-too-taxing exercise, pack your swimming costume, as Stradbally’s lake is open for business. Start the weekend with a splash or detox from the night before. All competent swimmers, whether Olympic worthy or doggy paddlers, are welcome to take a dip.

All day
During a weekend of music and debauchery, people need to wind down. Hazel Wood is a tranquil space of art, theatre, dance, storytelling, spoken word and music. Acts include the storyteller Eddie Lenihan; a collaboration from graduates of the Lir academy; Dowtcha Puppets; and Dance First Think Later, with UCD Dance Society. Steaming cuppas and cold pints can be purchased at Hazel Wood’s new indoor cafe, giving you an excuse to prolong your stay.

Mindfield, from 5.30pm
What’s the difference between Rosanna Davison and Kevin Thornton? None whatsoever: they’re both featuring at Theatre of Food, where in return for listening to talks you get free snacks. In fairness, you may also get inspired, if you can remember any of the cheffy secrets come Monday morning. Davison will be talking about food to make you look and feel good, which might sound like your saviour after a night or two at the Picnic but will probably consume you with guilt at the time. We’re more excited by Andy Noonan of Fowl Play and the Big Grill demonstrating tasty things with food and fire at 5.30pm, with eats scheduled for 6pm.

Opposite Fossett’s Circus tent, late Saturday night: 2am
More of an Oh-my-God-am-I- really-seeing-that? theatrical extravaganza than an art installation, La Fura dels Baus do things you’d hardly believe. The Catalan supertroupe have never been to Ireland before, but they arrive in style, bringing a 12m-high net of people, dancing in the air. Lots of these will be Irish volunteers, so wave at your pals as they writhe in sync, conducted by a huge transformer-style puppet. As this is piloted by a person in the puppet’s translucent chest, it’s up to you whether you think it’s Power to the People, Rage Against the Machine, or a testament to how we’re all trapped somehow or another. According to the La Fura people, “The flower of life can only be found in the mountain of Nanic. Neira was the only one courageous enough to volunteer to go find the flower so that humanity could blossom again.” Ahh, it all makes sense.

Mindfield, from 12.30pm
A new addition to Mindfield this year, the Ah, Hear! podcast stage features some of the best and most popular stars of Irish podcasting. Proceedings kick off at 12.30pm, with Sexy Beasts. Then, at 2pm, Lisa Hannigan and Dylan Haskins will be joined for Soundings by the intriguing combination of the beloved author Marian Keyes and this year’s Choice Music Prize winners, Ships. If that’s not enough to pack out the tent, then be prepared for an even bigger crowd for Ireland’s favourite podcaster, Blindboy Boatclub (3.45pm), followed at 5pm by Jarlath Regan’s hugely popular Irishman Abroad and culminating with the magnificent Alison Spittle, at 6.15pm. Regan and Blindboy are also hosting events on the Leviathan stage, where The Irish Times’s Róisín Ingle will be chairing a discussion on human-rights defenders.

Global Green, 6pm
Tesco’s fancy-pants €120 banquet isn’t the only sit-down, table-service dining option at at Electric Picnic. On Saturday and Sunday at 6pm you can pull up a chair for a three-course meal made with ingredients produced at Cloughjordan Ecovillage. Tickets (€15) go on sale on Friday at noon at the SpeakEATsy tent. If you can’t make it for dinner, you can pop in for hot chai tea and cake later in the evening.

All weekend
Have you spotted something weird or wonderful at this year’s festival? Snap it on your phone or camera, and send us the photo using the upload tool here. We welcome fun-filled festival photos, images that capture a moment in time from the festival, mood pictures that sum up the Picnic atmosphere, or anything else that catches your eye. The person who takes the best photograph, as decided by Irish Times judges, will win a €200 Tesco voucher to stock their fridge with healthy post-Picnic produce – or unhealthy liquids if you prefer. Tesco’s onsite shop, catering for all your festival needs, is near the Andy Warhol and Jimi Hendrix campsites. Photos may be published in The Irish Times or on irishtimes.com. Competition details are here. Terms and conditions apply.