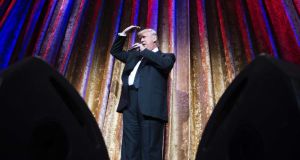 Donald Trump. “Even in a profession famous for creative disingenuousness, the current US president has been cavalier with la vérité.” Photograph: Jim Watson/AFP/Getty Images

Don’t worry. This is not another column about Donald Trump. But you’ve already spotted his name in it? You sense an argument involving the new president? Are you sure about that? I don’t see Trump mentioned anywhere here. Maybe you’re just imagining it.

Do you see what I’ve done there? This is a column about “gaslighting”, about that word’s recent devolution and about the man who died without knowing he’d coined it.

The usage derives from a durable play by the thirsty English writer Patrick Hamilton (and, more precisely, from the 1944 film adaptation). Hamilton was popular in his day, but he fell into obscurity following his death, from cirrhosis of the liver, in 1962. Just four years later Doris Lessing, future Nobel laureate, felt able to describe Hamilton as grossly neglected.

This is no longer the case. Thumbed paperbacks of his great novel Hangover Square, the story of an alcoholic struggling with a personality disorder, were passed between boozed-up students in the 1970s and 1980s. By the end of the century it had moved beyond cult status and become a classic to rate beside anything by his contemporary Graham Greene. (Both were born in 1904). Other equally fine works, such as The Slaves of Solitude and 20,000 Streets Under the Sky, remain morosely in print. He is to the cheap bedsitting room as Jane Austen is to the Regency estate.

During Hamilton’s period of obscurity two great works of cinema kept the work, if not the name, in the public eye. His 1929 play Rope, loosely based on the Leopold and Loeb murder case, was famously filmed in one simulated single take by Alfred Hitchcock. George Cukor’s version of Gas Light, a hit in the West End just before the war, remained a fixture on television for decades after its release in 1944. Ingrid Bergman plays a nervous young wife whose sinister husband, given suave malignity by Charles Boyer, is intent on convincing her that she is going insane.

The title (two words on stage, one on film) is extremely well chosen. “Gaslight” conjures up a Victorian mood. It also refers to a key plot device in the film. When Boyer turns the light on in another part of the building it causes the illumination in Bergman’s room to dim. He convinces her that she is imagining the alteration.

It’s not clear when the title was first used as a verb to indicate any attempt to make a target question his or her mental stability. No examples seem to exist before the 1960s. By the 1980s it was in common usage by academics discussing a precise form of abuse. The phrase “you’re just imagining it” is a common way of shutting down arguments and belittling reasonable complaint. Say it enough and victims may begin to doubt themselves. It is only in the past decade or so that that the usage has crept into everyday speech.

Hamilton thus finds himself in exalted company. There are only a very few literary works whose titles have become a common idiom. To become established, such phrases have to stand in for a concept not easily expressed in fewer words. “Catch 22” is so much neater than “a dilemma whose only apparent solution recreates the initial dilemma”. “Groundhog Day” is neater than “an apparently endless repetition”. The word “gaslighting” says something complicated in elegantly brief fashion. If you remain confused as to the meaning then go and watch the excellent film.

It’s all right. You aren’t going crazy. Here is where we, yet again, bring Trump into the conversation. Even in a profession famous for creative disingenuousness, the current US president has been cavalier with la vérité. We don’t need to detail the controversies concerning disabled journalists, tax audits or China’s global-warming “hoax”. Brief mention should suffice.

Observers desperate to summarise Trump’s technique have happened upon the word “gaslighting”. Lauren Duca, who has done such good work in transforming Teen Vogue, recently argued that “Donald Trump is gaslighting America”. In last week’s New Statesman Helen Lewis, deputy editor of that periodical, acknowledged that the word is overused but still felt able to call Trump the “Gaslighter-in-Chief”.

Both pieces are thoughtful and worth reading in full. But to ascribe such Machiavellian cunning to Trump is to do him unearned favours. He’s not trying to make us think we’re bonkers. He’s just lying. As the word is repeatedly used in this manner it begins to alter its meaning. Just as “troll”, which once indicated something quite different in online usage, is now a mere synonym for “bully”, “gaslighting” will soon mean nothing more than “repeated fibbing”.

That would be a shame. It’s a useful word. Patrick Hamilton deserves better. Or does he? Maybe it’s all in my imagination.