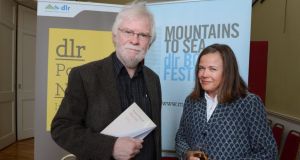 Victory was not, however, all that important; a sense of loss presided and O’Driscoll’s collection had been dominated by mortality and musings on the randomness of life, its sneaky haste. “The tally of years/added up so rapidly/it appeared I had/been short-changed,/ tricked by sleight/of hand, fallen victim/to false bookkeeping.” (From Time Enough.)

His sudden death last Christmas Eve, a week before New Year’s Day, which would have been his 59th birthday, prematurely denying the literary community of an original voice and astute critic, has become an eerie prequel to the loss of Seamus Heaney. Now more than ever the immense service done by O’Driscoll in his tenacious undertaking, Stepping Stones (2008), based on many questions put to Heaney about his life and his poetic impulse, is apparent.

Without O’Driscoll’s patient, intrepid and relentless probing there would be none of the many wondrous answers. Heaney never wrote an autobiography. Part of his story was glimpsed through his poems; the rest was caught, quite brilliantly, by a unique collaboration which testifies in equal measure to Heaney’s magical feel for memory, and O’Driscoll’s intuition.

It was O’Driscoll who asked of Heaney: “What has poetry taught you?”

And it was Heaney who, when writing of O’Driscoll’s death, acknowledged the “heroic virtue” that made O’Driscoll such a fine poet, such a good reader.

Subdued gathering
Addressing a subdued gathering on Saturday, poet Gerry Smyth, sensing the shared sadness, mentioned overhearing a remark made at Heaney’s funeral, that the roof had fallen in on Irish poetry with the two deaths.

“I think I know what the speaker meant. But we need to be careful. Neither poet would want ‘the roof to fall in on Irish poetry’ – and their legacies deserve a different response, one that signals a determination that there will be no falling roofs and the house will stand.”

In the century that has passed, and no one wrote more wryly of time’s passing than O’Driscoll, since The Irish Times first published Yeats’s prophetic September 1913, Irish poets have continued to mark the shaping of their society, and while Heaney looked to the tribal politics of his tradition, O’Driscoll responded to the politics of quotidian office life and, referring to his long career as a civil servant, described himself as “the Lord of the Files”.

“When poets die,” said Sirr, “they become their work.”

O’Driscoll’s limpid style, candid and unrelenting, possessed all-seeing intelligence. His commitment to his art was generous; his nine collections of poetry place him within the canon of major contemporary poets, while his essays and insightful criticism of central and eastern European poetry contained within Troubled Thoughts, Majestic Dreams (Gallery Press, 2001) are invaluable. A second volume, The Outnumbered Poet, is about to be published.

O’Driscoll will be further honoured on Culture Night, September 20th, in his home town of Thurles when his family and friends gather for an evening of readings at the Book Worm bookshop, off Liberty Square.

The poet’s brother Declan will read from O’Driscoll’s superb autobiographical essay, Circling the Square, a boyhood revisited with characteristic wit. “When an English tourist asked me if she was on the right road to Thurles, the perfect tongued-and-grooved ‘Th’ of her pronunciation and the way she rhymed it with ‘hurls’ confounded me. Having denied all knowledge of the place, the embarrassing truth dawned on me a couple of minutes after she had disappeared into exhaust smoke . . .”

Also central to the celebration will be Leo Cullen’s decision to read all of the questions put by O’Driscoll to Heaney in “Bearings”, part one of Stepping Stones.

Among the Dún Laoghaire’s festival highlights was poet Michael Longley’s reading during which he also honoured the memory of his close friend Heaney, and read The Harvest Bow (from Field Work, 1979).