As we mark Holocaust Memorial Day, it’s worth remembering that what our great essayist did was illegal – not just in Nazi Europe but also in Ireland, where Jews were not allowed to compete with the Irish self-image as the Most Oppressed People Ever 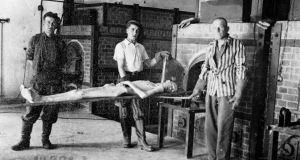 Treated like beasts: prisoners working in the crematorium at Dachau concentration camp, which Erwin Strunz avoided with the help of Hubert Butler and his wife, Peggy Guthrie. Photograph: LAPI/Roger Viollet/Getty

On the night of September 16th, 1938, a man called Erwin Strunz received a phone call at his flat in Vienna. The caller, a friend who had joined the Nazi party, warned Strunz that he had been chosen for deportation to the Dachau concentration camp. Strunz was a journalist and former trade-union official. He had also married a Jewish woman and converted to Judaism, making him especially obnoxious to the Nazis. His friend warned him that he would be taken away in two days’ time. Strunz turned for help to the great Irish essayist Hubert Butler. The latter had gone to Vienna entirely on his own initiative and at his own expense to do whatever he could to rescue Jews from the Nazis.

With Holocaust Memorial Day being marked on Sunday, and at a time when the questions of writing, courage and conscience are foremost in our minds, it is well to remember Hubert Butler. And, in remembering him, to remember also that most of what he did to save Jewish lives was illegal – not just in Nazi-occupied parts of Europe but also in Ireland. In retrospect we can see that he did something to save the honour of Ireland and that he stands far above the bigots and bureaucrats who were much more respected at the time.

The clarity of vision that makes Butler’s prose so riveting left him with no illusions about the likely fate of Europe’s Jews under the Nazis. His work is marked by its very particular combination of locality and internationalism; in 1938 that idea forced him to set the demands of the world against those of his country and, in doing so, to create in action an alternative sense of what being Irish might mean.

Butler’s decision to travel to Vienna and try to save Jews was forged from the universal demands of humanity. But it also contained a self-conscious assertion of an Irishness at odds with the Irish government and with Irish law. He was disgusted by the anti-Semitism expressed most infamously in Oliver J Flanagan’s statement in the Dáil about Jews: “They crucified our Saviour 1,900 years ago and they have been crucifying us every day of the week.” Butler felt, as he later wrote, that “I was as Irish as Oliver Flanagan and I was determined that Jewish refugees should come to Ireland”.

Shamefully, Butler was not, in any official sense, as Irish as Flanagan: Irish policy was infected with a toxic combination of anti-Semitism and self-pity. The Jews were not to be allowed to compete with the Irish self-image as the Most Oppressed People Ever. Butler attended the Evian international conference on the plight of Jewish refugees in July 1938 and was sickened by the attitudes of the Irish delegation, one member of which said to him: “Didn’t we suffer like this in the Penal days and nobody came to our help?”

This was not mere individual idiocy. The Department of Justice delegated power over refugees to a body called the Irish Co-ordinating Committee for the Relief of Christian Refugees. The rule adopted was that only Jews who had converted to Christianity should be allowed to settle in Ireland. This committee was given the power to vet applications to settle in Ireland made by European Jews. Its secretary, TWT Dillon, wrote openly in the Jesuit magazine Studies that non-Christianised Jews would be well looked after by the Jewish community in the US and that those who had converted to Catholicism were Ireland’s main concern.

It is thus almost certain that Erwin Strunz, and his wife and two children, would never have been allowed into Ireland. When Strunz turned desperately to Butler for help, Butler and his wife, Peggy Guthrie, got the family out of Vienna to London and then to Peggy’s family home in Annaghmakerrig, Co Monaghan (now the Tyrone Guthrie Centre). The Strunz family subsequently settled in Ardmore, Co Waterford. In December 1938 Lisl Strunz was interviewed by the Cork Examiner and warned of what was happening in the concentration camps: “Life in these camps is terrible,” she said, “and the people there are treated like beasts.”

Such warnings had little effect on policy, but Butler and Guthrie, working with Irish Quakers and with the American Quaker Emma Cadbury, continued to operate what was in effect a parallel Irish refugee policy. They secured exit visas for dozen of Jews to escape from Vienna, brought them to Ireland and, as they could not stay here, helped them to settle in the Americas.

This was a deeply personal activity – Butler’s daughter Julia remembers their house in Bennettsbridge as being always full of refugees passing through in these years. Numbers are hard to pin down, but there are certainly scores of people who were saved by the Butlers. Independent conscience saved lives and, at least to some extent, rescued Ireland from eternal shame. fotoole@irishtimes.com