It started small, but this year it will take in more than 3,000 events across Ireland 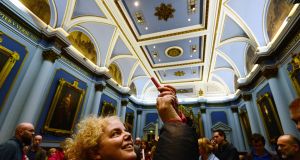 Tom Hickey isn’t entirely sure what a Cultural Trailblazer is, even though he is one himself. “It’s a name made up by an advertising agency, I suspect,” he says drily. “I’ve spent some time trying to figure out what they wanted me to do.”

There’s a mischievous glint in his eye as he speaks. He’s well aware that, as one of the country’s best-known and respected actors, he has been asked to be an ambassador for the many cultural events taking place across the country this Friday as part of Culture Night. Other Trailblazers include Mairéad Ní Mhaonaigh of Altan, singer Katie Laffan, Blindboy Boatclub from The Rubberbandits and intercontinental artist Solus.

On Friday Hickey will be reading some texts of his own choosing in Lilliput Press’s office in Stoneybatter, Dublin. He hasn’t quite decided which ones, but he will definitely do the climactic scene from Tom MacIntyre’s Rise Up Lovely Sweeney. “He hasn’t been well,” he says of MacIntyre.

Hickey himself has Parkinson’s, which imposes its own limitations on the work he can undertake. But he’s still happy to take on this gig, “pour le cause”, as he says. He’ll be just one of thousands of performers doing the same on Friday.

Culture Night started 11 years ago as a relatively low-key affair promoted by the now defunct Temple Bar Cultural Trust. This year it will encompass more than 3,000 events across the island of Ireland, with add-ons overseas in places such as the Centre Culturel Irlandais in Paris and the Irish Arts Centre in New York.

Last year more than 400,000 people attended some sort of an event on the night. The original concept took its inspiration from similar ideas around Europe, notably in Sweden and Finland. But Aimée van Wylick, who has been leading the event in Dublin since 2012, agrees that it has now outstripped them all in terms of its scale relative to the size of the country.

“It’s definitely fair to say that it is bigger now than they are,” she says. “And that’s largely down to the fact that the Department of Arts has pushed it to spread out across the country.”

While the scale has grown, there is no plan to expand Culture Night’s footprint in the calendar – it remains a one-night-only affair every September, in which people working in museums, galleries, theatres and other venues, along with actors, musicians and artists, give freely of their time.

The simplicity of the concept is part of what makes it work so well, says van Wylick, although it does mean those attending, particularly in the cities, have to make some tough choices.

“It is a lot to ask of arts people,” she says. “That’s definitely part of the charm. It’s almost like a tasting plate, a chance for people to get a taste of things they wouldn’t usually try.”

In Kilkenny, Karen Hennessy of the Design & Crafts Council of Ireland is looking forward to opening up the council’s premises at the National Design & Craft Gallery again to the public. This year’s activities, inspired by the gallery’s current Hi! Fashion exhibition of haute couture garments from Japan and Ireland, include music and making workshops, a “knitathon” and fashion shows from primary and secondary students.

“The initial catalyst for us getting involved was the Year of Craft in 2011,” says Hennessy. “One of the very first things we did was open up our centres of excellence, so people could come in and make their own jewellery. There’s nothing like being able to participate. Culture Night brings that out. For us it’s central to what we do. And the fact that it’s so children-based as well. It’s all about having a bit of fun; it’s not elitist.”

The idea of letting people inside the door or behind the curtain to observe or participate in the creative process is a recurring one.

“I think where we fall down sometimes is we’re too quick to close down and say ‘You can’t see this until it’s ready,’ ” says Caroline Senior, artistic director of Garter Lane Theatre in Waterford.

This year the theatre, which has been a participant since Culture Night came to Waterford, will have five events over the course of the evening, including readings and dance performances. Attendees can also visit Garter Lane’s artists’ studios to see their work in progress in a variety of mediums, including painting, drawing and ceramics.

“We realised it was a great way to reach new audiences. There’s such a volume that you can’t get to everything, which is great for Waterford,” says Senior.

Is there something about this country that makes it particularly suited to the Culture Night concept? Hickey thinks so. “The natural propensity for artistry comes from the marrow of our bones,” he says, proving he understands the role of Cultural Trailblazer more than he was letting on.