Some 1,400 venues to throw open their doors to public 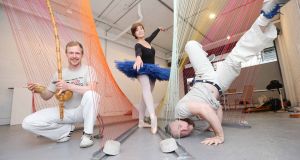 Museums, galleries, cathedrals, studios, observatories, libraries, parks, government buildings and theatres are among the 1,400 venues that will open their doors, free of charge, to the public on September 16th for Culture Night 2016.

Artist Pauline Bewick, alt-pop duo Heathers, musician and poet Ronan Ó Snodaigh and author Colin Barrett are among the hundreds of creative people participating in this year’s programme, which was launched yesterday at Dublin’s ArtBox Gallery.

This is the 11th outing for Culture Night, which has steadily grown to become the country’s most popular cultural event. Last year, 340,000 people attended events across Ireland. Culture Night will also showcase Irish culture abroad this year, with events in New York, Paris and Leeds.

“It’s the largest participative event, with all the venues involved, and all the artists,” said Culture Night co-ordinator Aimée van Wylick, at the announcement of this year’s programme: “It started in Temple Bar in 2006 and grew to be a national event in 2008. And it’s now all-Ireland because Belfast and Derry are also involved. In fact, it’s very hard to book artists on that night to perform because they’re all booked.”

Why has it proved so popular? “It’s giving something back to the community, to the audience,” said van Wylick. “lt’s looking to initiate people into culture, and also to rediscover their own cities, towns and villages.”

This year’s Culture Night will see a number of significant new venues involved. The interactive GPO Witness History exhibition and the EPIC museum of Irish emigration will both open their doors for free to visitors. Other new locations include Dublin Castle’s upper courtyard, where the RTÉ Concert Orchestra and special guests from music, theatre, comedy and poetry will perform in a live broadcast.

Another building to open its doors for the first time is Richmond Barracks, which will be open for guided tours.

Two popular Dublin locations which have become Culture Night fixtures are Aras an Úachtaráin, which offers tours along with musical and theatrical performances, and the Freemasons’ Hall on Molesworth Street.

Those who like their culture on the move might prefer Girls & Stations, a performance of an international music project developed by Rochus Aust founder of the 1st German Electrophonic Orchestra, which will start in Heuston station before travelling by train to Clara, Co Offaly. Would-be film-makers might appreciate the chance to tour Ashford Studios, the Wicklow film and television studios which are home to the TV series Vikings.

Culture Night 2016 will take place on Friday, September 16th from 5pm-11pm. Free bus services will be available in Dublin and Cork city centres to ferry people from one venue to another throughout the evening.

Full details of this year’s events and the participating venues, are available online at culturenight.ie.