Cloudy with a chance of artistic smiley faces

Stuart Semple says creative therapy saved his life, and since then he has championed its cause, created a cracking body of work and taken on Charles Saatchi 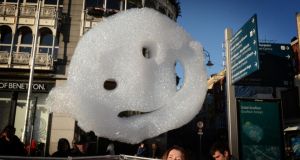 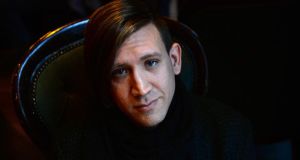 You might be familiar with the experience of seeing a face in the clouds, but artist Stuart Semple upped the ante when he set about creating clouds, thousands of them, that are actually big smiley faces.

His motivation was simple: to cheer people up. That was outside London’s Tate Modern in February 2009. It was, as he said at the time, a one-off installation, but since then the Happy Clouds have taken on a life of their own, reappearing in many locations including, now, Dublin city centre, Dún Laoghaire and Cavan town, all as part of First Fortnight Festival.

First Fortnight, founded in 2009, is a charity-based organisation that aims to challenge “mental-health prejudice through the creative arts”. Although only in his early 30s, Semple is one of the foremost English artists of the post-YBA generation. He has built an impressive international reputation over the past decade. Since 2011, he is also an ambassador for Mind, the UK’s National Association for Mental Health, a campaigning organisation.

Semple came into contact with Mind when his grandmother became ill. “She developed late-onset schizophrenia. She had this horrible narrative running in her head. We found it very difficult to get help. Eventually we got in touch with Mind, and they were incredibly supportive and knowledgeable.”

Semple auctioned a group of his works online and contributed the proceeds to the organisation, and has become closely, proactively involved with Mind. He also established a creative-therapy fund and enlisted the likes of Tracey Emin, Jake and Dinos Chapman and Sarah Lucas for a huge fund-raising exhibition. “I think it has supported nine projects so far, including the Hackney Choir, which is amazing,” he says. “The idea is to bring creative therapy to those who need it.”

In 2000 he came close to death when he suffered an allergic reaction. During the recovery period, “when I was at my lowest, feeling really terrible, I didn’t really have anyone to turn to. I was left to myself to deal with it, and I turned to painting. If I hadn’t had that I know I wouldn’t be here now.”

Access to that life-saving creative process can be taught, he feels.

His own crisis kick-started his artistic career, convincing him that making art was vital for him. He launched into a prolific spate of productivity, creating more than 3,000 works within a few years using an invented persona, “nancyboy”. Rather than going the conventional route and seeking out a gallery, he came up with the idea of auctioning individual pieces on eBay (conventional galleries have, in the meantime, caught up with him).

“I grew up knowing there were other ways of doing things than the conventional gallery. I mean Damien Hirst had put on Freeze in 1988. I’d go to raves organised by Jake and Dinos Chapman. In a gallery, you have one model of doing things, and the same audience tends to be there over and over again. That’s fine to a certain extent, but I knew you weren’t stuck with that, you could try different approaches and reach out and talk to different groups of people.”

Happy Clouds had an interesting genesis. When the musician Syd Barrett died in 2006, Semple wanted to make something in his memory. “He was a hero of mine. I came up with this idea of putting diamonds in the sky above Battersea Power Station.”

To make a cheering, airborne work was the basic impulse. But how? Some time later, Semple “heard about this guy in the US, who’d figured out how to modify a machine used to generate false snow in Hollywood movies so that it created clouds”.

Essentially, a mix of helium, soap and dye produces fluffy pieces of cloud that float off into the air before naturally and cleanly fading away to nothing within 30 minutes or so. “I immediately thought that I’d like to do something with that, but I presumed that other artists, would think that too and get on with it. I kept waiting to hear Tracey Emin was doing it. But no one did. So I thought, why not?”

Semple is very much an artist of and for our age of ephemera and celebrity, ADD and social media. He dwells happily in pop culture but shies away from being labelled a pop or even a neo-pop artist.

“I don’t think of myself that way. The idea of a group of people getting together and seeing themselves as a group like pop artists or some other movement? Culture is just too global and instantaneous now, too connected.”

The pop artists weren’t just rejoicing in the moment, they were looking to the future with a sometimes utopian enthusiasm. By contrast, there is something close to nostalgic in the way Semple represents what was momentarily the acme of cool.

He uses the language of collage or, a word he has used appropriately himself, mash-up. “We live in this world of chopped-up imagery, where we’re bombarded with all this stuff every day. So you have to deal with that, really.”

Hence the frenetic, fragmentary energy, the intermingling of media and personal images, the snatches of phrases that characterise many of his paintings.

There is a real intelligence at the heart of his art. On the one hand he clearly embraces the throwaway, famous-for-15-minutes soundbite culture of celebrity and distraction. On the other, he stops it in its tracks, recasting its giddy imagery in the slow, fixed medium of paint. He might seem to celebrate it, but he actually doesn’t quite trust the world of mass production and communications. His work implies a conviction that there is, or perhaps there better be, something genuine, something real, beyond the glam facade of throwaway culture.

The Saatchi rift
He has a finely honed instinct for timely gestures and initiatives. In 2005, annoyed that Charles Saatchi had dissed the YBAs (whom he had previously invested in and championed) by labelling them a footnote in art history, Semple sneaked a painting into the lion’s den – the Saatchi Gallery – that announced “British painting still rocks”. A year previously, though, Semple’s ambiguously titled Burn Baby Burn consisted of the remains of works incinerated in the Momart warehouse fire, many of which were by those same YBAs. It was a tribute, but one with an edge.

In 2007, his brilliantly titled show Fake Plastic Love was an instant sell-out, and established him as a crucial post-pop artist. His energy, as an artist, a curator and activist, is prodigious, yet in person he seems quiet, attentive and self-contained. “I get an idea and I have to just keep going until I’m done with it. I can’t even sleep, and then eventually I’ll burn out.”

There is, he acknowledges, a contrast between the extreme sociability of his work, his ways of presenting it, and its making.

“I’m quite a solitary person. I like the collaborative process partly because I spend so much time on my own in the studio. It’s a way of learning other skills, as well, because you bring in people who can do certain things better than you can.”

For a while, though, commercial pressures dictated that he employ assistants in the conventional sense of the term. He didn’t like it and gave it up. He was born in Bournemouth and has relocated there after eight years in London. “I like to be in the studio around eight in the morning.”

He is now developing a body of work derived from his own poetry, written with the aid of a variation of William Burroughs’s cut-up method, refined by the film-maker Harmony Korine. “I’ve always admired lyricists so much. I’m reading the Bob Dylan biography at the moment, and he seems to me to have this ability to go off someplace and bring back these extraordinary lyrics, to have access to this mysterious somewhere. It’s amazing where words can lead you.”

John Hume restored to his rightful place in Irish history
7

Shelbourne statues: Will we ever see them on St Stephen’s Green again?
8

Spaced-out Barcelona gets its groove on
10

A Traveller at the Gates of Wisdom: Lively but long-winded
Real news has value SUBSCRIBE