Close to the bone: getting into Beckett’s headspace 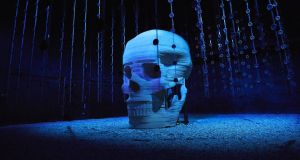 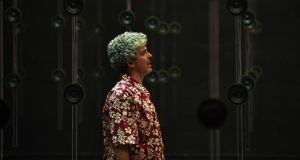 Peering out through the slatted eye sockets of an enormous wooden skull, a visitor to Andrew Clancy’s studio could feel a strange sensation; the experience of momentarily getting inside someone else’s head. In a large warehouse near Dublin Port, Clancy is discussing his fascinating creation with Aedín Cosgrove (the co-artistic director of Pan Pan theatre company and its designer) before it departs for the Samuel Beckett Theatre, where it is the centrepiece of the company’s new production of Beckett’s 1959 radio play Embers.

Four metres in height from the base of its jaw to the top of its cranium, the skull is constructed from more than 200 ascending layers of pale birch plywood, each piece cut with a jigsaw and judged by Clancy’s eye (a small medical skull served as a guide). Up close, the skull is awe- instilling and slightly giddying (any less than four metres, Clancy explains, and its immensity would not register from a distance).

The layers give it a crenulated look, as though modelled from a glitchy Cat scan. But there is something more pleasingly contradictory about it: an iconic death’s head wrought from living material – the wood still smells fresh and sharp – and Clancy and Cosgrove speak about it affectionately. The first challenge was to avoid cliche, to make something that recalled neither a memento mori or a Megadeth T-shirt – and though it is barely finished, they have already begun to consider the skull’s retirement plans after Embers returns from the Beckett season at the Edinburgh International Festival. Could it be a garden sculpture? An installation in Connemara?

“You know something?” Clancy says brightly. “It would make a great tree house.”

One skull, two occupants
The skull has two occupants: Andrew Bennett, an actor blessed with the most riveting voice in Irish theatre, warm and gravelly, and the beautifully pitched Áine Ní Mhuirí, both of whom performed in Pan Pan’s first production of Beckett’s work, All That Fall, in 2011. Once again, director Gavin Quinn is introducing a play written for radio to a theatre space, and once again he seems to have found a fascinating legal grey area when it comes to transposing Beckett’s work from one medium to another – something that both Beckett and his notoriously litigious estate long discouraged.

All That Fall was a painstakingly recorded version of the play, as detailed as a musical composition in Jimmy Eadie’s fine sound design, and was delivered in an uncannily designed space of rocking chairs and light installations. It was lulling and hypnotic, harsh and startling.

Embers, though, is a live performance: concealed within the skull, its actors deliver their lines through microphones, their voices weaving into Eadie’s new sound design. Early on, Clancy had considered basing his sculpture on the architecture of Beckett’s own striking face, and it is tempting to look for the author in its features. To some extent, Pan Pan is doing something quite similar: introducing the audience into Beckett’s headspace.

When Quinn talks about Embers, he speaks mainly in terms of sound.

Beckett’s play is typically alert to the specifics and artificiality of its medium. Its protagonist, Henry, walks to a beach where the sea and the clop of horse hooves sound on cue or brusquely cut out. There, he addresses his dead father, who may have taken his own life in the sea (“We never found your body, you know, that held up probate an unconscionable time . . . ”), while memories of family, friends and writing surge and subside around him. The sea, evinced here by oddly serene waves of pink noise, is an elemental and thematic force, an agent of erosion, annihilation, forgetting.

‘The sea is a character’
“There’s a very definite idea in the original play, and in our version, that the sea is a character,” says Gavin Quinn, “but the sea kind of wipes out stories. It wipes out memories. It erodes everything and it washes over. We have to get the right balance so that it’s suggested through the ear rather than intellectually.”

Beckett rarely had a good word to say about companies that took liberties with his precision-tooled texts. “Permission was granted for a straight reading,” he wrote of the famously experimental New York company Mabou Mines, which staged his novella The Lost Ones in 1968 with a naked performer in a landscape of miniature models. “This sounds like a pretty crooked straight reading to me.”

When, at around the same time, Ingmar Bergman approached Beckett to film both All That Fall and Embers, the director was flatly denied.

In recent years, though, the Beckett estate has relaxed its attitude towards transpositions, most significantly with the Beckett on Film project in 2001. Recently we’ve seen Gare St Lazare Players establish itself as a sparing stage interpreter of Beckett’s prose work (it tackles Waiting For Godot at this year’s Dublin Theatre Festival), companies such as Company SJ and Blue Raincoat find new approaches to the work, while the new Happy Days Festival celebrates Beckett’s work and influences in indirect ways. We may now be experiencing a deregulation of the Beckett industry.

If Pan Pan has a reputation as iconoclasts – staging Shakespeare or Sophocles or Synge in radically rethought ways – Quinn expresses no desire to reconceive Beckett’s texts. This doesn’t quite make it reverent – Pan Pan’s productions of All That Fall and Embers have strikingly different approaches to creating a theatrical experience – but there’s nothing sneaky about its interpretations.

All That Fall, with its exploitation of radio form and sound effects, was “an action-packed Beckett play”, notes Quinn, but Embers is a more ascetic affair. “He starts to hone in and strip away. He’s trying to write for the medium, while going deeper and trying to connect to our inner voices as we listen to things. He’s not even suggesting the characters are real.”

Listening to embers
Quinn filters everything through a sensual and almost synaesthetic response. “It’s kind of an awful sound, listening to embers,” he says to me at one point, “the way they scuttle and change and fall apart.” The performance is relayed through 600 speakers, hung on strips in radial patterns, so that it creates a “sound sculpture”; something felt as much as heard.

“Sound does affect you all over your body,” says Quinn. “That’s the idea of the piece. We’re hoping the sound will envelop all of the audience, their entire bodies. You’re actually immersed in sound waves you can’t see, a strange sound sculpture, some sort of geeky experiment. You’re walking into a room full of waves – sound waves and sea waves. This is only connected to what Beckett intended to do anyway. He wanted to create an auditory world.”

That is clear in the play’s sound effects and structure, which create a text like a musical score, but it often seems true of the words themselves. “Embers,” says Henry, “shifting, lapsing, furtive-like, dreadful sound.” Between those embers, which can be interpreted as the waning and flaring of an artist’s creativity, and the sea, with its threat of dousing those flickers, Pan Pan’s production is a collision of opposing forces: the living material of the wood and the image of the skull, the live performance and the recorded effects, life and death.

After this, Pan Pan will stage a work in progress at the Dublin Theatre Festival, Americanitis, based on the eponymous historical condition (“a mild anxiety from living in the urban world” as Quinn describes it). It will be the first production the company has devised that isn’t based on an extant text since 2009’s The Crumb Trail, and about as dissimilar to a Beckett work as you can get. “It’s very important to progress theatre,” says Quinn, and that seems to be the skullscape he inhabits with Beckett. “That’s the reason to do it. We don’t like to repeat ourselves.”

Embers runs at the Samuel Beckett Theatre, Dublin, until Saturday and transfers to King’s Theatre Edinburgh (August 24-25) with All that Fall (August 26-27) and Quad (August 27) as part of the Edinburgh International Festival