Christy Dignam: ‘Heroin wasn’t a high for me. It filled a gnawing hole, made me feel normal’

The Aslan singer gets the Pendulum audience on their feet singing How Can I Protect You? 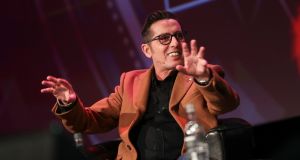 Christy Dignam on the main stage at the Pendulum Summit, a ‘business, leadership and self-empowerment conference’ at Dublin’s Conference Centre. Photograph: Conor McCabe

Refreshing, authentic and resilient. Christy Dignam has all the qualities a speaker at an inspirational business conference needs. But he’s the only one who also gets the audience singing (How Can I Protect You In This Crazy World?) and wrings a standing ovation out of them before 4pm.

The Aslan singer’s public interview with motivational speaker Paul McNeive at the Pendulum Summit in Dublin’s Convention Centre covers his early musical development: his father singing Caruso and McCormack as he made the dinner, his own Bel Canto lessons, and his epiphany, when a friend pointed out that Slade came from Birmingham and that “somebody from a place like Finglas could become a singer”.

He also discusses being a victim of sexual abuse at the age of six, when a neighbour sent the young Christy to the shop, then locked him up and assaulted him when he arrived home. Dignam talks about it in terms of answering why he always felt “a hole, a gnawing emptiness”, that he tried to fill with a single, with an album, with heroin.

“I think it was the sexual abuse. He said: don’t tell anyone, I thought that I’d done something bogey. I remember that cloud coming down over me when that happened. It was never the same.”

Later, with drugs, he found something to fill the hole. It wasn’t a high, it was that “it all went away. I just felt normal.”

Before that there were the early days, “cherry-picking” from the 10 local bands to form Aslan, who were “going to be huge and all that crap you tell yourself”. They found a pigsty – literally a pigsty, in an old farm near the airport – and dragged amps in a shopping trolley from Ballymun out to the airport daily, to practise from 9am till 5pm, six days a week, for a year.

This Is – the first single, and “the first decent song we ever wrote” – was originally “kinda rocky”, he says. Inspired by Annie Lennox the style morphed into the song it became. Borrowing is part of music, says Dignam.

“It’s terrible, in schools in places like Finglas, we were told if we studied well we could become a mechanic. And if we did really well, we might get a job in the tax office.” Higher aspirations didn’t come into it. So they were ill-equipped for success when it came.

Dignam talks about the shock at their height of arriving at an airport to find limos waiting for them: “They must think we’re the bleeding Pet Shop Boys!”

The abuse from his childhood was always in the background. “I felt unworthy, I almost sabotaged it. I did a very good job of sabotaging it.’

They were going to be “the next U2”, before the slide into addiction, or “the dive into addiction”. He was fired from the band. Aslan “kissed and made up eventually”,but only after years of bitterness.

Describing how he got clean at a monastery in Thailand, Dignam paints a vision of hell: bunches of schoolkids, bussed in to learn the lesson “this is how you’ll end up if you take drugs” and taking pictures; the monks behind them, having given Dignam and about 20 other addicts a potion-cure that made them all vomit. “It was hardcore. I felt if it was too easy to stop I’d fall back into it again.”

He talks about the songs’ contexts. “These are the hands of a tired man” is about his father, an upholsterer, who didn’t own anything and lived in a council house.

“This is the face of a teenage mother” refers to social changes. “The Catholic Church was losing its grip on Ireland; teenage mothers didn’t have to be put in a laundry but could live at home.”

“Everybody hits you.” is about Irish people’s begrudging attitude.

Dignam talks too about learning he had blood cancer, and not accepting it, telling the doctor, “get back to Trinity and give back your f**king degrees because you haven’t a clue what you’re talking about”. But, “he was right.” Doing chemo, and chatting to people for hours, he discerned that “people who were really defeated [about their illness] nearly all died. The ones who were positive, some of them survived.”

“Cancer in a way was the best thing that ever happened to me” because he realised the only thing that was important to him was “seeing my grandson’s communion, or my granddaughter’s confirmation . . . everything I’m looking for is right here in front of me all the time”.

“I don’t want to get all political, but for a nation the size of this” with our resources, “government after government haven’t done anything to help the housing crisis or the health crisis”. He looks out at the 7,000 people, many entrepreneurs among them, and reminds them that “if we leave it to politicians it’s never going to happen”.

At then he sings This Is. And then Crazy World.